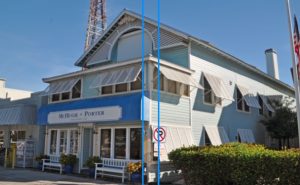 When architect Rick Thurkow bought Boca Grande’s infamous “Hotel Hell” in 1986, he never dreamed he would be entering his own permitting purgatory.

Before he finished his $150,000 renovation of the 70-year-old structure, Thurkow would spend two years “haggling with building and zoning officials” to get the approvals he needed.

“Rick gave us some real horror stories with respect to problems he had trying to get building permits and bring an old building up to code,” Bill Spikowski, Lee County principal planner, told Boca Beacon reporter David Futch in November 1988.

It turns out that Thurkow’s frustrations were not in vain. His building nightmares were fodder for Spikowski and others who were pushing for a new historic preservation ordinance in Lee County.

The end game was a positive impact on historic renovation efforts in unincorporated areas like Boca Grande – providing relief from floodplain regulations, building and zoning codes and other burdensome regulations.

The more construction and development, the more tax money would flow into County coffers, they reasoned.

Others supported the ordinance as a way to help protect the area’s unique small-town character, including its older homes and commercial structures.

The job of selling the Lee County historic preservation ordinance to the public fell to Ivan Rodriquez. He presented the first draft in September 1988 to the county’s existing Historic Preservation Commission and about 20 concerned citizens at the Fort Myers/Lee County Public Library.

Rodriquez, a consultant for Lee County, was director of Dade County’s Division of Historic Preservation and author of a similar ordinance there. At the meeting he explained major parts of the 50-page draft.

At least one attendee suggested that the ordinance would be a “procedural nightmare.” But Creighton Sherman, executive director of the Gasparilla Island Conservation and Improvement Association (GICIA), thought Rodriquez’s plan was a good starting point.

Making the entirety of Gasparilla Island a historic district was part of the GICIA’s first iteration of The Gasparilla Island Act. Passed in 1979 by the Florida legislature to restrict development, density and zoning changes, the Act was thrown out by the courts shortly after it was signed into law by the governor.

When the GICIA redrafted the proposal for the 1980 legislative session, it excluded the historic district provision, along with a controversial citizen review panel, on the advice of its attorneys.

But the GICIA never gave up hope of obtaining a historic designation and a local panel of Boca Grande residents who would have some say about the district’s future.

The Lee County Commissioners adopted the county-wide ordinance in December 1988 and by the end of 1989 had established two historic preservation boards. As part of the larger Lee County board, the Boca Grande entity was responsible for the aesthetic, archeological, cultural, historical and architectural heritage of its community as defined in the Lee County Plan. Both boards met in Fort Myers.

By June 1990, Boca Grande officially had its own historic district. Planners from Lee County established the boundaries and guidelines for managing the district. However, no one bothered to put up signs, leaving the precise area a mystery to most visitors and many residents to this day.

The Boca Grande Historic District encompasses residential and commercial uses and includes the downtown area, running from 1st Street to approximately 20th Street. Waterways Avenue on the east of the island is not included, nor are the “Dam” streets, parts of Lee and the east side of Palm Avenue, south of where it is joined by Waterways.

There are approximately 134 contributing properties in Boca Grande. Most are at least 50 years old, although age is not the only factor used to declare a property historic. They contribute to the character of the district or may be the location of historical events or people that define the Boca Grande history.

The district includes numerous noncontributing properties – those built too recently to be considered historic or which have been altered to the point that they are no longer part of the old Boca Grande style.

Sixteen years after the district was set up, Boca Grande was given its own Historic Preservation Board, which meets in the Boca Grande Community Center a minimum of four times a year.

The seven-member board is made up of island residents appointed by the District 1 Lee County Commissioner for staggered three-year terms. Board members can be reappointed.

Two members are at-large appointees. The others include individuals with backgrounds in history or archaeology, real estate, land development or finance, law or urban planning, engineering, architecture, building construction or landscape architecture.

Members are subject to financial reporting and the state sunshine laws, which prevent them from discussing pending matters outside of a public forum. In a small community like Boca Grande, the urge to chat about the issues at hand is sometimes difficult to overcome.

The late William Winterer, an affable man who enjoyed the company of his fellow board members, became acquainted with the sunshine laws the hard way.

“He wanted to have a party and invite all the board members. He found out that to have a party he would have to give public notice in the newspaper that there was going to be a ‘meeting’ of the board on that date. Bill changed his mind and cancelled the get-together,” a friend of his remembers.

Hearings are often routine but occasionally controversial. A recent meeting dealing with changing a residence to an assisted living facility drew a standing-room-only crowd. The normal audience numbers less than a dozen.

Next Week: Solving the puzzle of building in Boca Grande’s Historic District.