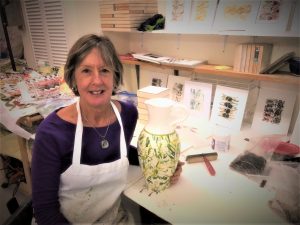 Perhaps this kinship between the 88-year-old and Jane has grown out of their love of the northern wilderness. Both have multi-acre tracts of wooded land near Traverse City – not far from each other. Whatever the reason, Jane was especially enthusiastic when she picked up George’s contribution to the 2020 Strawberry Festival’s silent auction, to be held on March 7.

George’s beautiful bowl is just one of 70 silent auction items that will be available at the Strawberry Festival, which will be held from 9 a.m. to 2 p.m. Saturday, March 7, in the Crowninshield House and neighboring grounds. The festival, in its 22nd year, raises money for charities serving women and children.

This particular bowl is made of spalted ripple beech, George explained from the living room of his condo on the island’s southside, his dog Duke by his side.

“I love using beech trees because in another few years they could be gone. When I use the wood to make a bowl, I feel like I’m preserving something,” he said. “The rippling effect makes it even more interesting.”

George, an outdoorsman and former radiologist, arrived in Boca Grande with his late wife, Barbara, 30 years ago. He started carving fish and making wooden spoons for something to do after he retired in 2000. Now he walks through the woods near his summer log home in Michigan, gathering up rare timber. The best pieces of wood – the ones that make the most unusual items – are spalted or decaying. This summer George created 18 bowls.

Recently he’s experimented with using palm trees, which require twice as much time as a normal bowl. “Some palms bend but don’t cut successfully,” he explained. “It’s a guess as to how the wood will perform when I start working with it.”

The results of this extra effort are highly prized palm tree creations, which are sold at Newlin’s along with other examples of George’s craftsmanship.

Activities besides the auction include bargain and boutique “shops,” fun for kids, a book nook, grilled brats and hotdogs and delicious strawberry shortcake.

The Festival benefits from the hard work of scores of people from the Methodist Church and the Boca Grande community, including folks like George Benisek who have been generous contributors over the years.

Boca Grande Artist Susan Shaffer is a frequent participant in the silent auction, as is famed oil and watercolorist Jane Carlson. Rocky Dedrick’s dog paintings are always popular. Gail Cleveland has donated a giant grouper painting from Smart Studio. Ellie Crawford, a longtime member of the UMW, has gifted a lovely beach scene.

Fans of knitted or crocheted items will find lots to like in the items contributed by Bev Furtado, Kim Hume, Peggy Siebert and Elsa Soderberg. Local jewelry-makers Danni Ervin, Nancy Ireland and Candace Ward are adding plenty of bling to the auction. Englewood Bank, Executive Dog Training, Kappy’s, Made to Inspire, One Call Covers It All, Photos by Heidemarie Burke, Sunporch and The Tide, along with Courtyard Hair and James Griffith Salon, will have fun items in the auction.

There will be many activities for the outdoor lover to bid on, including tennis lessons, fishing trips with some of the island’s best captains, golf at The Gasparilla Inn and Lemon Bay, and fitness with Virginia Williamson and Renee Lindsey. Fabulous dinners from local restaurants and resident chefs are up for bid – as well as a picnic on Cayo Costa. There are trips to the Broadmoor Hotel and Disneyworld.

“There’s something for everyone. That’s why people start lining up way before the doors open at 9,” said Festival Chair Becca de Rosa. “Where else can you have more fun and get a good deal or two, while helping others in need? Hope to see everyone there!”