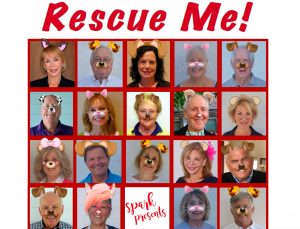 The excitement is building. The fur is flying. And 30 of Boca Grande’s most talented stars are busy rehearsing for this year’s musical review, “Rescue Me, Too!”  On January 10 and 11, get ready for an evening of singing, dancing, comedy and fun – all for the benefit of the Suncoast Humane Society’s Capital Campaign.

Last year’s musical fun-raiser, “Rescue Me,” had several hundred audience members wildly applauding as our band of BG performers sang love songs to their pets. This year, we are the pets.

Cats. Dogs. Bunnies. All singing their hearts out as they look for everlasting love and a forever home.

Imagine Julia Pierce singing “Wouldn’t It Be Loverly” as a shelter pet yearning for a room somewhere. Or Elaine Skypala as a kitten trying to entice someone to adopt her with “Hey, Big Spender.” Or Ross and Pat Witschonke as a man and his adopted pup dedicating their love to each other with a version of the Beatles, “I Will.” Or Erica Ress Martin as a broken- down Hollywood pooch resigned to her shelter fate with a rendition of “I’m Still Here.” Carol Elwood and the Pussycats are back with “I Feel Kitty,” which is not the version you know from West Side Story. Robbin Gilligan and Kathi Hustedt tap their way into your hearts with “Me and My Shadow.” And that’s not even half the show.

“Rescue Me, Too!” is produced by Spark Boca Grande, with all profits going to the Capital Campaign of the Suncoast Humane Society. Spark Boca Grande is led by Erica Ress Martin and Roger Lewis. Together, they produced and directed this evening of merriment.

Tickets for “Rescue Me, Too!” are available at bocagrandetickets.com. Premium seating for the first two rows center is $100 a ticket. General seating, which is first-come, first-seated, is $50 a ticket. Join the fun on January 10th and 11th at the Crowninshield House at 7 p.m.

“Rescue Me, Too!” It’s guaranteed to fill your heart with joy.