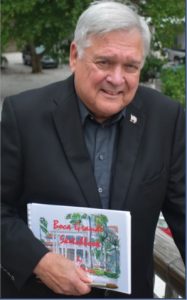 Through the years, artist Jack Horner sketched scenes from Boca Grande, added some watercolor to the images and incorporated them into a new book called “Boca Grande Sketchbook.”

The book was just published in the winter of 2018.

Some of the sketches include “Old Boca Grande” before modern-day growth took place.

In the book, Jack has included 47 sketches of the island’s churches, the Gasparilla Island Light, the library courtyard and several scenes from around town. There’s even one of the Boca Beacon office.

“How can you live here and not observe and appreciate the composition and beauty everywhere you turn?” Horner asked.

“It’s been a project in my mind for years.”

Over the years, the artist has done spontaneous sketches and washed them out in watercolor. He’s been building the collection since he started coming to Boca Grande.

Jack was president of the Boca Grande Art Alliance in 2006-2007. He organized a juried show in 2007 to commemorate the 20th anniversary of the Alliance, and arranged for artist Ray Kinsler to jury an awards show that was held in 2007.

“He gave quite a presentation. He had so many good stories to share. He talked about running into Katherine Hepburn here on the island, and how it was not uncommon to bump into her in Hudson’s,” Jack said.

Jack teaches an annual watercolor painting class at the Art Center and regularly participates in art shows on the island.

“I believe it is the commandment of the artist to record the events of his time, and I hope you enjoy this truly genuine labor of love,” Jack states in the preface of the book.

Each sketch in the book is perforated, so the pages can be pulled out and placed in an 8” x 10” frame, if desired.

The book was printed by “A Better Choice Printing” in Englewood.

It is currently available for purchase for $88 at The Gasparilla Inn gift shop near the lobby.

Jack is also hoping to do a book-signing event on the island in the upcoming weeks. Keep reading the Boca Beacon for details.