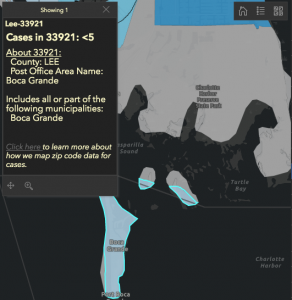 BY MARCY SHORTUSE – A case, or cases, of COVID-19 have finally showed up on the radar of the Florida Department of Health this week, as they are reporting “five or less” cases in the Lee County portion of the island on their dashboard. The addition of island cases showed up on Tuesday’s update.

In order to protect anonymity, the computer results will only show “0” cases, “<5,” “5-9”, etc. No exact numbers are used. That means the island has less than five cases tested and confirmed right now.

In the Charlotte County portion of the island there are still no cases reported.

Meanwhile, since this time last week the state has 5,492 new confirmed cases, and 292 more deaths. Our total as of Thursday morning was 28,832 cases and 960 deaths.

Charlotte County is reporting 161 confirmed cases and 12 deaths, with 29 patients who have been hospitalized.

On Tuesday, April 21 Charlotte County Commissioners announced they would be re-opening their beaches on Monday, April 27. They said that parking meters will be temporarily disabled, and no public restrooms will be open.

They also announced that sports fields and dog parks would open on Friday, April 24. No team sports or leagues are allowed to play, though.

Lee County beaches are still closed at this time. While some Lee County Parks & Recreation trails and amenities reopened Wednesday, April 22, none so far, though, are on the island. Most Lee County facilities remain closed, including most parks, ballfields, playgrounds, pavilions, recreation centers, beaches and restrooms.

Lee County Library System services’ exterior book returns reopened beginning Wednesday at all branches for patrons to drop off checked-out materials. No fines will be assessed for items overdue because of library closures.

On Saturday, April 18, Gov. Ron DeSantis and Commissioner of Education Richard Corcoran recommended that all Florida public and private K-12 schools continue distance learning and keep campuses closed through June 3. Island School Head-of-School Jean Thompson said she was told that the school calendar would not change in that regard.

On Monday, April 20, local television news stations showed video of the previous weekend’s boating activity, which included at least 100 boats clustered together on the sand bar, and at Stump Pass State Park. Charlotte County Sheriff’s deputies did what they could to quell the crowd, and to move people along who were anchored on the beach at Stump Pass (all state parks along the shore are closed right now).

According to Florida Fish and Wildlife, you could be issued a fine of up to $500 or serve up to 60-days in jail for social distancing violations on the water.

In a poll the Boca Beacon conducted online which asked, “Do you think the state’s non-essential businesses and schools should open on May 1, 85 said we should open back up, while 131 people said it is too early.

Newer PostCCP Wuhan Virus or a cold?
Older PostA message from the Clinic: Help us slow the spread of COVID-19