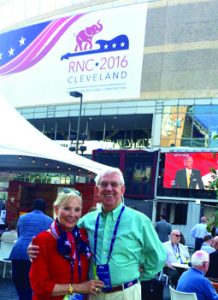 BY MARCY SHORTUSE – Island residents David and Patty Hayes walked down the street the 1.5 miles from the Rock and Roll Hall of Fame to Quicken Loans Arena in Cleveland Ohio on Tuesday, July 19 with an easy heart. They were leaving a party hosted by Ohio Governor John Kasich and were en route to the Republican National Convention, an event many thought would be fraught with protest and violence.

According to Hayes, while the area surrounding the downtown Cleveland area was not rife with violence, it was fraught with snipers and law enforcement. Lots and lots and lots of law enforcement. So much so, only one meager group of about 25 protestors made themselves known. They were surrounded by officers on bicycles, carrying weapons as they marched single file, back and forth.

David and Patty spend part of their year in their Toledo home, so it wasn’t a stretch for them to make it to the convention. It did take a lot of prep time, though, to get their background checks cleared and tickets confirmed.

“It was truly amazing,” David said. “We got there and had to stay at a hotel 20 miles south of Cleveland, in Akron. A friend took us up to convention hall, where we met another friend who is with the Lucas County Republican party. We got there about 2:30 p.m. on Tuesday, as our friend had two tickets for John Kasich’s event prior to the opening of last night’s convention, at the Rock and Roll Hall of Fame. It had been sold out for weeks, but we were lucky enough to go.”

David and Patty were happy enough to get into the RNC convention, but to be able to attend the Kasich event was like winning a double-header. So they sat outside the hall and waited, even though the event was supposed to start at 3 p.m.

“It was sweltering hot, waiting outside for 40 minutes as they checked tickets,” David said. “Then we were waiting and waiting again, and we knew we couldn’t wait much longer because of the convention opening.”

The fates are often fickle. Right about the time the couple knew they had to leave for the Quicken Loans Arena, the Cleveland fire marshal came and said no more people were allowed in the event. With no readily available transportation, David and Patty started the 1.5-mile walk to the convention hall.

To say the police were everywhere would be an understatement.

“Every corner, every block, on both sides of streets, there were police,” David said. “I was so impressed. They looked to be from every state in the union. There were snipers on rooftops – the good kind. There was Secret Service, there were officers from Michigan, Wisconsin, California, all in groups, and all very nice to talk to. It was impressive to see that much security. I wasn’t concerned at all once I saw that.”

While David never had a second thought about attending the event, he did have many friends who warned him what could happen there. That’s why it surprised him when they arrived at the arena, provided their credentials and were in the door so quickly.

“We got there about 5:40 p.m. but found two seats way up top. We stayed up there to hear roll call, to hear the states vote. When they got to New York we knew it was getting close to Florida, so we moved up. Out of nowhere, our friend came up and said we could sit in Sen. Rob Portman’s (R-OH) box on the floor. That’s where we spent the rest of our time.”

David said one of the most riveting moments of the convention was when Gov. Chris Christie spoke about Trump’s Democratic rival, Hillary Rodham Clinton.

“His speech brought everyone to their feet,” David said. “Particularly everyone started chanting, “Lock her up! Lock her up!”

When it was over at 11:30 p.m., everyone had buses to take them to their hotels. David said every single bus had an armed police officer riding in the front.

The only sad part of the whole trip, David said, was that Kasich did not attend the rally.

“I have known John Kasich for years when we was in Congress; we always supported him. But he didn’t even go. Every delegate vote in Ohio was for him, and he was the host of the event. But he decided not to go. That was sad for us. But the excitement of the whole day was beyond anything I could remotely describe. We were overwhelmed. It was historic, that’s for sure.”