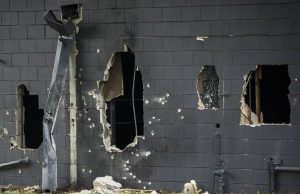 ■ BY MARCY SHORTUSE – A Boca Grande native was one of the Orange County Sheriff’s Office law enforcement officers who responded to the Pulse Club shooting in Orlando early Sunday morning, June 12.

He was, in fact, a part of the initial response team. Detective First Class Matt Futch is the son of Capt. Mark and Kathy Futch. He has been with the Orange County Special Investigations Division for seven years and was uninjured in the incident.

Neither of them was injured in the incident either.

Mark said he said he didn’t find out about what was going on in Orlando until later Sunday morning, when a friend of his who lives in Orlando, Bill Bishop, texted him the news.

He was shocked when he finally had a chance to turn on the television and saw Matt handling the bomb squad robot.

At this time the FBI is conducting the investigation. It is reported that 49 people are dead, the shooter is dead, and approximately 50 people are hospitalized after what happened at Pulse.

On Thursday Futch, Westerberg and Cavis were awarded Medals of Heroism by Gov. Rick Scott.

Governor Rick Scott said, “I was honored to recognize Orlando’s incredible law enforcement members today with Medals of Heroism for bravely risking their lives on Sunday to engage the gunman.

I join all Americans in expressing our heartfelt gratitude for their sacrifice to save lives and their hard work throughout the ongoing investigation. These American heroes will forever be remembered for their courage during this horrific tragedy in Orlando.”

Matt and some friends recently got to go on the boat with Mark about three weeks ago and were 9 for 13 with their tarpon releases.