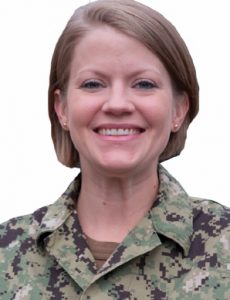 Kathy grew up in Boca Grande and was very involved with the drama club and in many Royal Palm Players productions.

“Growing up in Boca Grande was incredibly unique,” she said. “I didn’t realize it at the time, but having grown up and moved into more populated areas, I’ve realized that the freedom and opportunities offered to young people who live on the island isn’t found many other places. The size (and relative safety) of the town really encouraged independence from an early age, and I was able to participate in countless activities.”

Her mother, Ellie Young, said she feels Kathy had a very positive experience growing up in Boca Grande.

“She was very active and participated in just about everything that Dee Wheeler brought to the island,” Ellie said.

“From the time she was six she wanted to act,” Ellie said. “Her first performance was playing a spider in ‘Charlotte’s Web.’ For many years, she and her father (Bob) were in almost every production the Royal Palm Players produced.”

Kathy said RPP gave her the opportunity to learn and grow as a child and young adult.

“And it gave me a ton of confidence that I would take with me throughout the rest of my life,” she said.

Kathy was a part of the gifted children program and did very well in school.

The Navy Lt. Cmdr., currently 34, went to Stetson University to earn her undergraduate degree and then attended law school at St. Louis University.

“My mother is from St. Louis, and my parents met there and lived there for a while in the past, to include a few years after I was born,” Kathy said. “I still have a lot of family in the area, including a half-sister, and I wanted to get out of Florida following college. I liked the feel and size of St. Louis as a city, and St. Louis University offered me a scholarship to work on my law degree.”

She never thought about joining the military before college, when it became clear to her that she wanted to work in the public sector.

During her third year of law school, she met with a Navy officer and realized she could combine her legal experience with her love for travel and decided to join the service.

“Thus far, the experience has been highly rewarding,” she said. “I’ve had the opportunity to live in three diverse locations across the United States (Gulfport, Miss., Washington, D.C. and Seattle, Wash.), and I have deployed to Afghanistan in support of Operation Enduring Freedom. Every new job and new location has meant different responsibilities and different legal duties, which have prevented me from getting burnt out or bored with the subject matter. I’ve had the opportunity to be a legal assistance attorney and a defense counsel, work with administrative law and be the primary legal advisor to the 1-star admiral in charge of the Pacific nuclear ballistic submarine fleet.”

Kathy and her husband, Joseph, currently reside in the state of Washington.

Situated at Naval Base Kitsap-Bangor in Washington, not far from Seattle, Submarine Group Nine oversees eight of the 14 Ohio-class ballistic missile submarines in the Navy’s fleet.

As a staff judge advocate, Kathy is responsible for being the principal legal adviser to the commander of Sub Group Nine, dealing with a number of legal and ethical concerns of importance to the command.

“Serving in the Navy offers me the ability to honor my country and the freedoms it provides,” Kathy said. “I get to uphold our way of life, while at the same time having an exciting career as an attorney.”

Her parents have been permanent residents in Boca Grande since 1990 and have been coming here since the 1980s.

They currently split their time between South Carolina and Gasparilla Island.

“We’re very proud of Kathy,” Ellie said. “She is leading a fulfilling career – and finding more time for marriage and a child. She will be delivering our first grandchild in November.”

This is a follow-up story to a piece submitted last month by the United States Navy Public Information Office.