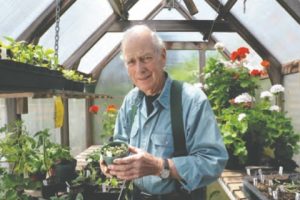 Russ Morash, the distinguished WGBH Boston producer and program creator, is speaking to the Boca Grande Garden Club on Tuesday, Jan. 8 at 2 p.m. His topic is “Remembering the Victory Garden,” the popular PBS show that has aired in one incarnation or another for 44 years.

First airing April 16, 1975 – also  known in Boston as the birthday of Patriots’ oach Bill Belichick – the show grew from a simple “how-to” focusing on growing a backyard into a vegetable garden to its current dive into the whole wide world of North American gardening. A recent show on the relaunched “The Victory Garden’s Edible Feast” explores the use of Laotian herbs in Madison, Wisconsin restaurants. Another episode takes a look at the Hmong people of Minnesota, who have given new life to the Midwestern truck gardens, turning local farmer’s markets into big business.

Russ Morash’s big idea is that people can watch, learn and do. Dubbed the “granddaddy of do-it-yourself” television by a waggish Boston Globe writer, Mr. Morash used this principle to inform the shows with which he is most closely associated. These shows read like a hot list of must-watch and most-respected TV, including “This Old House” and “The New Yankee Workshop.” Most famously, he partnered with Julia Child, “this strange woman with a strange accent,” as he quipped. Together they created “The French Chef with Julia Child” in 1963. He cheerfully acknowledges the accuracy of those urban legends about her kitchen mishaps and her cheery “Eh bien, tant pis!” (Oh well, too bad!).

As they say in show biz, Russ   Morash’s shows “have legs.” Each episode feels as fresh as yesterday and is jammed with ready-to-use information. “The Victory Garden” has grown from when the garden sat in Russ and wife Marian’s backyard to an exploration of flora and fauna writ large. But it retains a basic focus on pests and potting soil, building cold frames and using salt marsh as mulch.

Mr. Morash’s work won him an impressive 13 Emmy Awards. Achievement enough, that was crowned by the prestigious Lifetime Achievement Award by the 2014 Annual Daytime Creative Arts Emmy® Awards. Norm Abram, master carpenter on “This Old House” and host of ‘The New Yankee Workshop,” said at the time, “As a brilliant creator/producer/director, Russ Morash used his personal passion and love for well-prepared food, gardening, home improvement/repair and woodworking to develop a whole new genre of television programs. Russ always wanted to learn more himself, but more importantly he wanted to share knowledge with others. The experts and craftsmen he featured on the shows he created did just that. Generations have been and will continue learning “how to,” thanks to Russ, who started it all over 50 years ago with Julia Child.”

Here’s one secret from “The Victory Garden”: Jim Crockett, original host of what was then called Jim Crockett’s Victory Garden, didn’t like to eat vegetables. Left-over produce from the show ended up in the Morash kitchen and helped kickstart Marian Morash’s James Beard Award-winning career. More secrets to come.