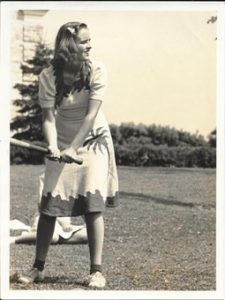 It was the third game of the World Series, and Babe Ruth was coming up to bat. He pointed toward center field, stepped into the batter’s box and slammed the ball 440 feet over the center field wall.

“My dad was a huge Cubs fan, so it was very exciting to be there with him,” Stanton said.

Stanton grew up in Winnetka, Illinois, about 18 miles away from Wrigley Field. Her father started taking her to games when she was a young girl.

The Cubs lost five previous trips to the World Series in Stanton’s lifetime, the last encounter taking place in 1945.

On Wednesday, Nov. 2, she was finally able to see her home team win the title. Stanton played second base for her school softball teams while growing up, and she passed the love of the game along to her four children, who are all devoted fans.

To this day, she remains a Cubs fan and watched several of the 2016 games with her caregiver, Wendy Herda.

Ironically, Herda is from Ohio and was rooting for the Indians, which might have brought up some banter between the two of them.

“I would do my Cleveland Indians’ dance in the morning for her when they won,” Herda said. Stanton, who has been a resident in Boca Grande since the 1980s, also is a Tampa Bay Rays fan and has frequented many Stone Crabs games in Port Charlotte.

At 96, she isn’t exactly the enthusiastic baseball fan she once was. She still watched the games this year – the ones that she could stay awake for.

“I’d get along fine if they won or lost. Baseball is a great game,” she said.