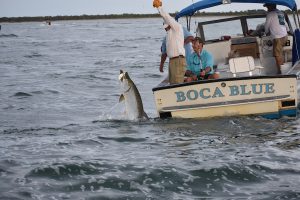 A  rough patch of weather and an iffy tide may have slightly slowed the fishing for the 2019 World’s Richest Tarpon Tournament, but the circumstances were summed up by Capt. Sandy Melvin quite succinctly: “Fish have tails. Sometimes, they swim away. Fishing is different every day.”

Melvin and his team – anglers Bob Melvin, Ron Walker and Donnie Cayo – won the World’s Richest with five releases in the tournament’s two-day span. This was Melvin’s second World’s Richest win, with his first in 2011.

“We were very fortunate the first day,” Melvin said. “We hooked the third fish of the first day, but the other two suffered shark attacks. We hooked up and managed to get ours to the boat. We landed him quick. When we managed to land the first fish for the $12,500 it took the pressure off. We were able to relax, and we fished confidently, knowing we had our entry fees and other expenses paid for … and we got on a little roll. We don’t take it lightly, though; knowing the quality of the fishermen I compete against, it’s an honor to come out on top. It’s hard to compete with these guys.”

Capt. Dave Hayden’s team on Irene had the first hook-up of the first day, and Capt. Charlie Coleman on Casuarina had the second. Both were shark- bit and were not good releases. 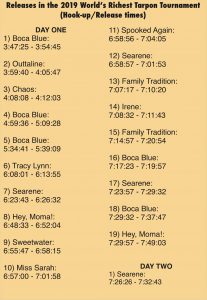 Boca Blue almost took the last fish of the first day as well, as they hooked up at 7:29:32. Capt. Wayne Joiner on Hey, Moma! and his team masterfully hooked another at 7:29:57 – just three seconds before the tournament ended – and brought that tarpon to the boat for a release.

Fishing was consistent that day, with 19 releases total. On the second day, however, the low-pressure system sitting over the area won out, and there was only one tarpon released – at the end of the tournament – by Capt. Lamar Joiner Jr. and his team on Searene. It worked out well for them, as they got the first fish and last fish of the day, for checks totalling $25,000.

Wesley Locke, the tournament director and executive director of the Boca Grande Area Chamber of Commerce, said the tournament went well, and she was pleased with their second year of holding “Tarpon Week” traditions.

“This was our second ‘Grande Tradition’ event, presented by Grande Aire Services, and it honored the 37-year Grande Tradition known as the World’s Richest Tarpon Tournament,” she said. “We want to thank our speakers – Nat Italiano, Dusty Hopkins and Seth McKeel – in helping to keep our traditions alive, and in honoring Capt. Jimmy Robertson for his contribution as a local fishing legend, tournament captain and his involvement in the Boca Grande Fishery. Thanks to Carroll Sawyze for her hard work in putting together our art show. Thank you to all the captains and anglers for making it another great year, and lots of kudos to all of our Board members and volunteers who helped us rock the Pass and downtown Boca Grande again this year.”

■ Capt. Sandy Melvin releases one of the five fish his team caught during the World’s Richest Tarpon Tournament. They took first place and a total of $42,500 in official tournament prize money.