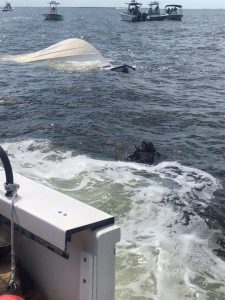 When emergency personnel arrived on scene, the vessel was capsized. One adult male, Eli Mack, 46 of Port Charlotte, was rescued from the water uninjured and another person was reported to still be under the vessel. Charlotte County Fire Rescue deployed a dive team and located the missing boater, Calogero Polizzi, 63 of Port Charlotte, in the cabin of the vessel, a 22ft. Cuddy Cabin style.

Rescue crews immediately began CPR and the victim was transported to Englewood Community Hospital. Despite life-saving measures performed from the time he was found by emergency personnel and hospital staff, Mr. Polizzi did not survive.

FWC is conducting a thorough investigation to determine what led up to this accident.

Newer PostRare green nest one of the last hatches, 642 hatches total so far
Older PostSo much more than a breast cancer survivor: Kathy James shares a personal story of her journey