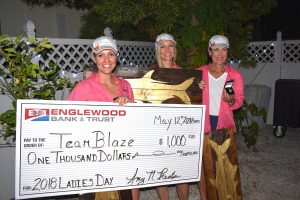 Capt. Waylon Mills was on fire in Boca Grande Pass last Saturday, May 12 as he took Team Blaze to victory with a first place in the 2018 Boca Grande Area Chamber of Commerce Ladies Day Tarpon Tournament. Out of the two tournaments the Pass has seen this season – Howl at the Moon and Ladies Day – he is 2-0.

Third place with last fish caught went to Boca Beacon anglers Sue Erwin, Caroline Clabaugh, Christine Cunningam and Lynn Erb with Capt. Chad Bombenger aboard Tsunami. Cunningham hooked up with and released the last fish of the tournament, also known as her first tarpon ever.