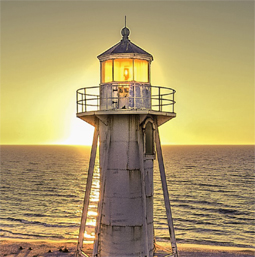 The Barrier Islands Parks Society held a meeting on Monday, March 14 to discuss progress on seasonal fundraisers as well as give updates on the Gasparilla Island Light project.
Jim Grant gave an update on the progress of the GIL project.

“Everything is moving ahead and we’re expecting to get the final licensing by April 1,” Grant said. “We have to keep up on the fundraising. It’s a challenge, but we are nearing the end of season and we need to get the word out now. I believe everyone on the island is in support of this project.”

In August, 2013, the government agreed to transfer 7.4 acres of prime gulf property where the rear range light has stood for the past 89 years to the Barrier Island Parks Society – a gift worth more than $20 million – with the condition that BIPS will fund, restore and maintain the property and lighthouse.
A new 5-foot walkway around the exterior fence is in the planning phase.
“We still have to raise a lot of money, but we could theoretically get this job done this summer,” Grant said.
Hustedt added that the Board is 100 percent behind the project.

BIPS is planning to host a town meeting on the project within 30 days. Check the Beacon for updates.
In other BIPS news, Green Gala coordinator Pam Pierce said the event is sold out.
“There are eight people currently on the waiting list, and the total auction value of the items is around $30,000,” Pierce said.

Park Manager Chad Lach also gave an update on the barrier island parks at the meeting.
“We have the permit, so we can now dredge out Cayo Costa. I would say that within a few weeks we’ll be able to get boats in and out of there,” Lach said.
Lach added that it’s been a very busy season at Gasparilla State Park.
“The spots are filled almost every day by noon, so we have been closing the gates,” Lach said.
Lach also said that a ranger position that was lost last year is once again approved, and they should begin interviewing candidates for the position in the upcoming weeks.

Treasurer Ched McConnell said he is planning to give a full financial report at the April meeting, stressing that he’d like to factor in the numbers from the Green Gala.
Elaine McLaughlin from Friends of Cayo Costa said the “Evening for the Island” fundraiser was well attended and very successful.
“We’re currently looking into some other smaller ideas for fundraising,” McLaughlin said.

Executive Director Sharon McKenzie announced that three upcoming wading adventures on Gasparilla Island, plus one on Stump Pass and one on Don Pedro Island, are scheduled for this month.
“We also have the Great Seashell Adventure planned for March 23. That’s always fun, because we give out prizes instead of candy, and the parents and kids seem to enjoy that,” McKenzie said.
Retail sales from the two gift shops were also reported to be up from last year: 30 percent for the museum store and 15 percent for the Cayo Costa store.

A golf tournament fundraiser is also currently being planned for this October at The Gasparilla Inn.