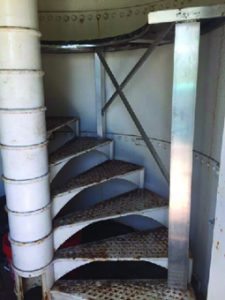 Barrier Island Parks Society (BIPS) has asked for your help in protecting Gasparilla Island Lighthouse by watching out for trespassers on the property. Most recently, vandals gained entry into the lighthouse after a previous failed attempt. It is most likely youths who think it is fun to break into the lighthouse and climb to the top.

According to BIPS Executive Director Sharon McKenzie, “The lighthouse is very dangerous, because some of the stairs and the catwalk are unstable. We do not want to see anyone hurt. We also do not want to see anyone arrested, especially our local youth. Gasparilla Island Light is federal property that comes under Homeland Security. This means that, if they are arrested, they will be charged with a federal offense to the full extent of the law. No one wants to see that headline.”

Please do your part in asking trespassers to leave if you see them on the property, or call the sheriff if they refuse. This lighthouse has been a guardian on our island for 89 years. Maybe now it is time for us to guard the light.

Update BIPS is in the final stages of the NEPA (National Environmental Protection Act) review. Jim Grant, Gasparilla Island Light Project chairman, stated, “Our construction team and the County permits are in place. We expect any day for this review to be signed so work can begin.”

The strict NEPA review covers many agencies and is taking longer than they had anticipated. Most recently, BIPS had to obtain a Section 106 document from the State Historic Preservation Office stating the restoration work would have no adverse effects on the historical nature of the structure.

According to Sharon McKenzie, “We also had to provide historical evidence that the lighthouse had been sandblasted and painted in 1990. Thank you to The Boca Beacon for their archives in helping to provide the records we needed!” Sharon also shared a little-known secret in anticipation of the big day.

Their metal designer, Alex Klahm, has been in his shop creating things to enable work to move quicker once approval is obtained. An example is lighthouse scaffolding. You might think this is not a big deal, but in order to work inside a lighthouse and allow other workers to pass, specialized scaffolding has to be created to custom-fit the interior of the lighthouse.

The big day might not have yet arrived, but it is obvious they are all working behind the scenes to ensure that things run smoothly and quickly once it does.

Summer is a slow time of year on the island, but according to BIPS, they continue to receive donations and are extremely happy when they do.

Larry Hannah, BIPS director and development chairman, wanted to again thank all the wonderful donors who continue to support the project. According to Larry, BIPS has raised $1.2 million but still needs those who have not given to donate so they can reach their goal of $1,783,000.