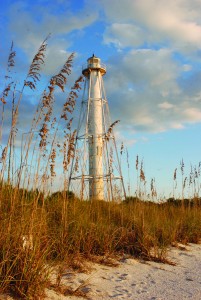 It’s been a long and challenging journey, but finally on Saturday, Feb. 9, the Gasparilla Island Lighthouse will once again provide a flashing light in our sky as a nighttime aid to navigation for local boaters and fishermen. The Barrier Island Parks Society (BIPS) announced details this week for its upcoming ceremony to commemorate the completion of the restored property and structure and the relighting of the historic Lighthouse.

Following a lengthy process requiring approval of numerous state and federal agencies as well as the U.S. Coast Guard and Army Corps of Engineers, BIPS is now in the process of building and installing an exact replica of the original Fresnel lens that has been in place since 1927. Additional landscaping and improvements of the property are also planned between now and the February celebration.

Exact details for the evening are still in the making but include meeting the “miracle team” of architects, metallurgists and painting and restoration technicians that pulled off this awesome undertaking for Boca Grande. There will also be a ribbon-cutting ceremony, a countdown to the relighting, and the unveiling of an engraved plaque alphabetically listing the many donors that made restoration possible. (Businesses and inviduals are also being sought to help sponsor the event.)

All donors through November 30 of this year will be included on this “Founding Donors” exhibit, so there is still time to help us with a contribution toward our remaining funding needs.

It will be an evening to remember and celebrate as our beloved lady once again shines its beacon over Boca Grande!