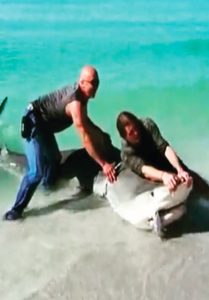 This is the second in a three-part series about the sharks that swim in our waters, especially during tarpon season. This part will be from a shark angler’s perspective, and the third part will pertain to what types of sharks are in our waters and how dangerous they are to humans.

Night fishing in Boca Grande Pass is one of the best times an angler can experience, but when you’re in a tiny kayak filled with bloody meat in shark-infested waters it’s a whole new level.

A local shark fisherman we will call “K” prefers not to be named, but he spent some time discussing what it is he does, why he does it and why it’s so misunderstood. He was born in a house very near the Boca Grande Causeway, but his family has since moved. Either way he’s a Florida boy who has fished these waters for more than two decades.

“I’ve fished coastally my whole life, and I’ve been land-based sharking for five years now. Land-based sharking is appealing to me because I find it to be a more pure form of fishing, more fair to the fish. Sharking off Boca (Grande) is obviously special due to the fact the tarpon migration occurs in the Pass and the bull sharks spawn in Charlotte Harbor. It makes for a very active island for sharks. Bait is whatever the sharks are eating at the time, like rays, catfish, mullet, etc.

“But so often we are met with hostility. People think we’re scum, when nothing we are doing is illegal and the Florida Fish and Wildlife Conservation Commission knows it. They people, though, do not. This year I was told by law enforcement to ‘find a new place to fish.’ I told them they couldn’t do that, but that tells you what kind of stress they are under from the community.”

Shore-based shark fishing faces a definite stigma here on the island. Some people have found stinking, bloody buckets of bait left on the beach, others have found trash. Just recently the headless shark found near 1st Street created a sizable commotion, and many said it was the shark fishermen who were the culprits. Some people are merely uncomfortable when they see people on the beach in the wee hours of the night.

K said conservation has become a vital part of maintaining our fisheries, and that includes sharks.

“The sport is, in my opinion, getting better. If anything it is shifting into a culture of conservation where the idea of killing sharks is savagery.” Now we just snap a picture and it vanishes back into the sea 95 percent of the time.”

There is that five percent, though, that is beyond their control. As with tarpon fishing there is that occasional time when the shark does die.

“Shark fishermen on the island mostly target bull sharks and black tips, but understanding that the area waters also hold hammers, tigers and lemons that could potentially be by-catch is important, so we come equipped to handle all scenarios. No one can truly control what eats the bait. Some times things happen we cannot control.”

K doesn’t care for shark meat himself, so he does his best to catch and release, after doing quick measurements, taking some other statistics and placing a dermal tag on the shark in the name of research. He said there are many shark fishermen on the island who work with agencies like the Florida Fish and Wildlife Conservation Commission as citizen volunteers. The specific group K is tagging for is the Coastal Shark Tagging Initiative (coastalsharktagging.org). Anyone who wants to volunteer their time (and occasionally skin) can go to the site to get tags and information regarding how to attach them to the shark.

“I kayak baits into eight-foot swells sometimes, because if the tide is right we just go,” he said. “The sharks are always there. When you’re taking the bait out in the kayak in the Pass you feel the bull sharks bumping into it. You’re 300 yards out, it’s pitch black and you can see the silhouette of their bodies under you in the phosphorescence. They can smell the blood going through the drain holes.”

While K wouldn’t be specific about what he uses for bait, he laughed and reassuringly said it wasn’t anything like “cats and dogs.” This is another tale told in the cyber world, that many shark fishermen use household pets found on Craig’s List or other sites for bait. While we’re not saying it hasn’t happened before, people are more likely to use road kill than to go to the trouble of going to someone’s house and spending time picking up an animal to be used in that manner.

“We use straight circle hooks, as to avoid gutting,” he said, “and we cut every hook to avoid risking the jaw break. The farther away you take that bait out, the bigger fish you’re going to get.”

As far as getting them to shore in a timely manner, K said time is of the essence to keep the shark healthy and give it the ability to swim away swiftly after being caught and tagged. Handling a large shark in the name of tagging it can be risky business, obviously, but K loves to do it.

“I’ve been scratched a handful of times, they sling their head toward their tail and like gash you with one or two teeth,” he said. “They get me on my hands and my knees; when that gigantic muscle slaps you with its tail it just kind of shaves you to the bone, then leaves you with a nasty infection.”

Getting the shark to the beach is about as difficult as it sounds sometimes. K said it is very important to the shark’s survival that the catch goes as quickly as possible.

“You have to keep the swim bladder in the water, it’s kind of like pushing a kayak around,” he said. “If it’s over six feet you have to keep it afloat. If you put a 500-pound fish on the land its heart can explode. As far as how long it takes to get them to shore, all fish are different. Sometimes it takes eight minutes. Other times it takes two hours. As far as I’m concerned it should never take more than 40 minutes, and you can do that if you know what you are doing and are properly prepared.”

“A lot of people know it’s really cool to catch a shark,” he said, “and a big fish gotta eat, and you can tie pretty much anything to a string with a hook and catch something out there. So a lot of people go out with cheap, undersized and discount equipment, driven by dreams of Internet fame and ‘likes,’ and they hook big fish sometimes and they kill them. These are the people who don’t cut the sharks into pieces and kayak them all the way out past the sand bar like a real man does when he kills a big fish. They leave it on the beach, like a scumbag.”

K’s disdain for inexperienced anglers who don’t follow the rules of common courtesy is apparent. He said the reason most people on the island think all shark fishermen leave trash and bait on the beach is because the good shark fishermen – and he said they are in the majority – don’t leave a trace that they’ve been there.

“We try to police each other,” he said. “Whenever there’s a problem, like with the shark on the beach recently, we get on the people who did it and handle it from the inside as much as possible.”

According to K, shore-based shark fishing is one of the even playing fields between man and fish. It is an adrenaline rush well earned, as one man can take a 500-pound monster from his home turf in the water and bring it to the beach … his own territory.

“In a boat you have unlimited range, you can chase them, and they can’t get away in most cases,” he said. “On the beach not only are you level with their mouth, you are landlocked. You have 800 to 1,500 yards to reel that fish in, all the while remembering the fact that there are rocks, sandbars, and boats between you. But ethical shark fishers know, if it doesn’t outweigh you it’s not worth it … and if you didn’t catch it from land you cheated. This levels you with nature, it reminds you exactly what you are.”

Next week’s article, the last of three parts – will contain more specific information about the sharks in our local waters – the good, the bad and the ugly.