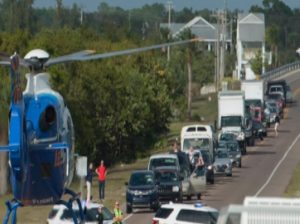 On Friday, Dec. 20, a call to 911 for a fall from a bike was received at 2:13 p.m. A Charlotte County emergency response was dispatched to the Boca Grande Causeway.

When they arrived, they found a patient lying down. The crew determined the patient to be a trauma alert, and Lee Flight flew to transport the patient.

Boca Fire and Lee County EMS arrived on the scene and assisted with landing Lee Flight. Patient care was transferred to the flight crew and the patient was flown to Lee Memorial.