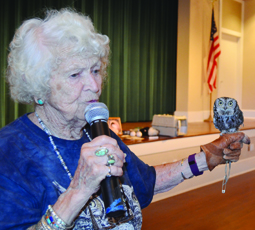 Standing on the stage with E.T., the great horned owl by her side, wildlife rescuer Doris Mager informed the crowd that this would be her last year doing an educational program in Boca Grande.

Mager has traveled to the island every spring for the past 35 years, her mission being to educate people of all ages about the importance of rescuing birds of prey.

“I love this island, but I am over 90, and I think I’ve put in my time,” the spunky speaker said.

She introduced her assistant, Bob Seaton, who has been working with her for the past 30 years.

“He travels with me all around the country and helps me at all the shows. I couldn’t do it without him,” she said.

Students from The Island School filled the first few rows of the auditorium at the Community Center on Wednesday morning. Mager geared her discussion to them and talked about how important it is to make good choices by not discarding leftover food in public places.

“I’m sure you all know better. But when you do that, the rats will come, and the owls eat the rats, so they will swoop down to get them and risk getting hit by cars,” she said.

Mager said she was hired by the Florida Audubon Society in 1962 to sell telescopes and binoculars. She recalled that one day someone brought in an injured eagle that had been shot, and one wing was injured so badly that it needed to be removed. She said she knew, somehow, that the bird knew it would never fly again. “When I looked into that bird’s eyes and it looked back at me, I thought it was the most beautiful thing I had ever seen. But something happened to me spiritually that day, and I knew it was my calling to help with rescue efforts,” she said.

Since the 1960s, Mager has cared for more than 80 injured eagles, one golden eagle and many types of hawks.

After handling E.T. for a few minutes, she handed the owl off to Island School kindergarten teacher Megan O’Connor, who proceeded to walk up and down the aisles giving guests a closer look. Then Mager instructed O’Connor to let the owl fly, and within seconds it spread its wings and made its way back to the stage.

Mager said that although the 34-year-old owl is named E.T. after the movie character, she refers to her as “Extra Terrific.”

She also brought a tiny screech owl named “Impy,” which she walked around with, giving the audience a closer glance.

After the presentation, guests had a chance to pose with E.T for photos.

Mager also had T-shirts with owl imprints on them for sale, and copies of her book, “A Tribute to a Golden Eagle” onsite to help raise funds for her nonprofit organization, SOAR (Saving Our American Raptors).

Since January, “The Eagle Lady of Florida” has been traveling with the two owls in her van, doing the free shows. She’ll be doing a few more talks in Florida and Georgia over the summer, and then she’s planning to move from North Carolina to the state of Washington.

The free event is part of the Lee County Parks & Recreation Department. The Boca Grande Woman’s Club sponsored the program.