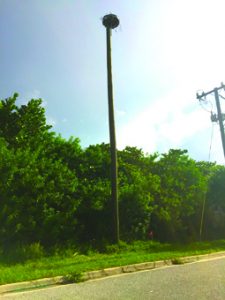 Seagate Development contractors are down at the southern tip of the island on the old FPL property almost every day now, getting ready for building to begin on the new housing development called Hill Tide Estates. It was a project that brought out very little community protest, at least until an osprey nest came into the picture.

This week down on Belcher Road, residents learned that the newly constructed osprey nesting platform located on the east end of Belcher would be taken down any day.

That led to speculation among many residents who had worked hard with the Florida Fish and Wildlife Conservation Commission to get that platform where it is today, speculation as to why it needed to be taken down in the first place.

Gary Morse, the FWC’s media representative for this part of Florida, is currently checking into why the pole has to be removed. He said it is normal for the pole to be simply relocated, not just removed, but he was checking into this particular case as of press time.

The pole is at least partly on the county easement (it is actually almost parallel with the property stakes) and was erected by the FWC about 18 months ago.

While one of the contractors down at the site told a resident the development company owned all the way to the street, Seagate’s attorney, Charles Basinait, said what he probably meant was that it was theirs with the exception of the utility easement.

It is arguable whether or not an osprey platform is considered to be a utility … at least for humans. Basinait said it was more than likely a case of a fee simple title, which is a form of freehold ownership, which implies an absolute ownership of the land.

Technically, Seagate would have the right to remove the pole, but upon hearing more of the Belcher Road residents’ stories about how hard they worked to get the platform placed there, the company started to take more of an interest.

One representative of the company told a resident they had “no idea what it meant to them,” and that they were actually looking into where they could relocate the pole.

Basinait agreed with that and said they had started to actively pursue a new location for the pole, with guidance from the FWC.

“We’re trying to figure out where to put it,” he said. “We’re speaking with our environmental consultant and looking at infrastructure, road right-of-way issues and the placement of the wall that is going up, all with the purpose of relocation.”

There were permits given by the FWC for this pole to be removed, as well as for another osprey nest to be taken down from a tree near the beach. Seagate also received permission to relocate several gopher tortoises that live on the property.

Seagate is clearing the land at this time, with no set date for hard construction to begin.