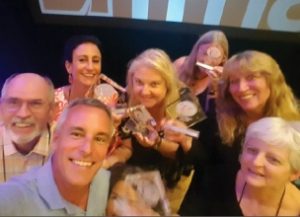 Friday, Aug. 10 was a busy day for our staff as we took to the road to Orlando for the Florida Press Association Better Weekly Newspaper contest and the Florida Magazine Association Charley Awards.

In the Florida Magazine Association Charley Awards the Gasparilla Island Magazine staff received six awards, including two out of three places for best in-depth reporting. Editor Marcy Shortuse received a silver and bronze recognition in that category for her stories called “A Tale of Three Sisters: The Struggle Over a Tiny Island Paradise” and “Handling Irma: How an Island Came Together.”

Writer Sue Erwin received a bronze award in the “Best Public Service Coverage” category for her story called “Captains for Clean Water,” and Skip Perry and Christine Cunningham took home a silver award in the “Best Design: Use of Photography” category.

“It was a great year for us at both events,” said Publisher Dusty Hopkins, “but we will continue to strive to bring more recognition to our staff, and to our newspaper and magazine, by bringing even more competition to the table next year.”