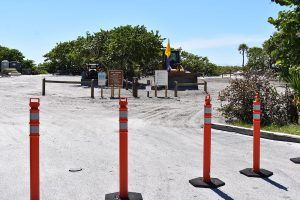 The parking area at the state park beach located at 680 Gulf Boulevard was temporarily closed due to Florida Light & Power utility work recently.

The project was to secure hardening feeder maintenance for the power company.

Certain overhead lines and poles on the island are being removed and placed underground.

This will be happening from Boca Bay Drive north along Gulf Boulevard. The work is planned to be completed by the end of the year.

“The 2004-2005 storm seasons forever changed our business,” Bertot said. “Those storms had devastating effects on our customers and infrastructure. We knew we had to build a stronger system to better withstand future storms. Since 2006 we have invested nearly $4 billion to make our system stronger, smarter and more resilient to severe weather, hardening more than 47 percent of main power lines serving critical community facilities and services such as police and fire stations, hospitals and 911 call centers.”

In addition to this project, FPL is installing more than 5 million smart meters and 110,000 intelligent devices along the energy grid, using advanced technology that helps detect problems and restore service faster if outages occur. Workers are also planning to clear trees and other vegetation – a major cause of power outages – from more than 15,000 miles of power lines annually.

The business will be completing one full inspection of the company’s 1.2 million power poles and upgrading or replacing those that no longer meet FPL’s standards for strength. Approximately 150,000 poles will be examined annually over the next eight years.

“We will be continuing to replace wooden transmission structures with new ones made of steel or concrete,” Bertot said. “In Hurricane Irma, we saw that underground power lines performed better than overhead power lines.”

“This project is part of our efforts to build a stronger, smarter and more storm-resilient grid,” Bertot said.