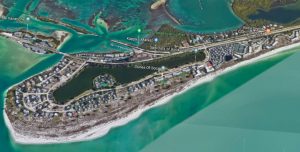 Boca Grande Sea Turtle Association patrol members reported that a fair amount of beach erosion took place this week at the north end of the island due to wave activity from the effects of Dorian. One patrol member posted a video on Facebook from one of the zones that showed a four-foot escarpment – a long, steep slope separating areas of land at different heights. Fortunately, for the most part the turtles are finished nesting, and the nests that have been documented are mostly on higher areas on the beach.

“Nesting has dropped off, and hatching continues to be in full swing,” said Boca Grande Sea Turtle Association Board member Mel Csank. “It’s very busy for the patrol members right now, as we recently are getting near the end of the season.”

As of Friday, August 30, there were 613 nests documented by patrol volunteers (22 were green nests and the rest loggerhead), and 601 false crawls have been reported. A false crawl occurs when a turtle makes its way onto the beach but doesn’t produce a nest. Patrol members said they expected a high number of false crawls in June due to the beach renourishment project.

Association volunteers would like to remind everyone to be cognizant of your surroundings when visiting the beach. Sea turtle nesting season officially began on May 1 and runs through October 31. It’s more important than ever to remember to cover up holes and knock down sand castles when visiting the beach during the next few months. Always dispose of any trash, and remember – no lights at night.