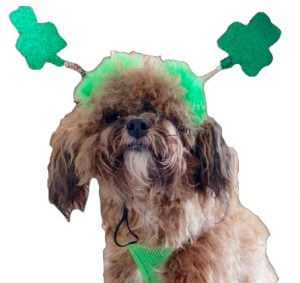 There once was a setter from Dublin,
Whose name was Fido McFin.
He hoarded his chews,
As far as we knew,
And left none for the rest of his kin.
It’s the long-awaited Boca Grande Woman’s Club Dog Show! Tomorrow, March 16, festivities begin at 10 a.m. at the Boca Grande Community Center with the parade of dogs. Big, small, little and tall, it’s a real dog party, and you are invited.
Irish costumes for both audience and participants (dogs and humans) are encouraged and applauded.
Put on your green and join the scene, follow the rainbow to our pot of gold the dogs (and their owners) will keep you grinning with antics to behold!