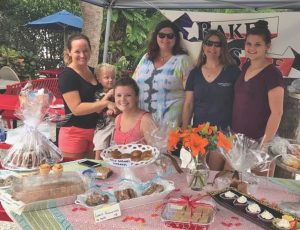 ■ Ronica Davis of Native Gardens and her friends Pat Cole, Rebecca DeRosa, Tina Tersigni, Karissa Cumberland, Annie Fransoz and Kourtney and Teresa McDaniels held a bake sale to raise money for people in Texas suffering from the aftermath of Hurricane Harvey. They raised $2,725 through their efforts, even in September on Boca Grande. Part of the money was given to Jeremy Jeffers, a Texas resident with close local ties, who was helping to feed people there after the storm. Jeremy will use the money to continue with his good work. Other money was donated to the Southern Sportsmen Disaster Fleet, and more still was donated to the Boca Grande Lighthouse United Methodist Church. What makes it even better was that the money was given to Michael Saunders & Co. of Boca Grande, and their anonymous donor matched those funds to double it. Local Realtor Bob Melvin of Gasparilla Island Properties was one of the biggest donators, and Jacques Boudreau of Loose Caboose gave a sizable amount as well. Thank you to all who donated to this great cause!

Newer PostAll eyes on Irma: The storm once headed for us shows how we can all work together to get through it
Older PostBucket brigade for Texas: Lighthouse Church donates flood buckets for hurricane victims