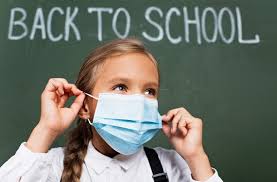 BY OLIVIA CAMERON- While the first day of school is usually dreaded by kids, but welcomed with open arms by parents, thanks to an extended summer and a delayed start to fall classes the dread children usually feel has been replaced by enthusiasm.

This year, it was many parents who were experiencing some feelings of trepidation at sending their children off into a world that has been touted as unsafe for many months.

For some parents, there were a lot of difficult decisions to make before school started. Local mother Julie Jean Robertson, an employee of Barnichol Hardware who has lived here her whole life, sent her daughter to L.A. Ainger Middle School on August 31.

“Savannah absolutely loves it,” she said.

The former student of The Island School sees a few former classmates on her new campus, as she’s made the adjustment to a much larger system.

“She was ready to go back. We know classic brick-and-mortar schooling is better for students all around, so it was a mutual decision for her to attend school in person,” Julie Jean explained. “It’s made Savannah more responsible, too.”

The only downside Julie has noticed is that her daughter tends to develop a migraine about once a week after wearing a mask for the entirety of the school day, including bus trips. Regardless, Julie’s daughter has taken the middle school transition with ease. Her other two children attend The Island School and the Boca Grande Preschool.

“During the homeschooling period when each of our kids were at home, we had my mother’s help because my husband and I work full time. A little extra help made our lives easier.”

Renee Lindsey, parent of Makaila, has also watched her daughter adjust to a new school. After attending The Island School, Makaila has just started at Sky Academy in a seamless transition.

“She has an adaptive personality,” said Renee. “She understands the importance of following the safety procedures. She is still getting used to an unfamiliar student body but has been handling the process very well.”

Renee has been able to breathe a little easier even with sending her daughter to a new school, ever since the administration has kept up with updates and open communication across multiple platforms. To her, the communication system works well to keep parents informed and give them some peace of mind.

“My 5-year-old, Cole, just started at The Island School, and both have done well transitioning into new environments. I am comfortable with the small environments they are exposed to. I don’t want to see virtual learning ingrained into their future. I want kids to learn in an environment that best suits them,” she said.

On the other hand, Bella Vida partner Kerri Jacobs has been maintaining the café and the schedules of her three sons. Her oldest, Logan, switched over to The Student Leadership Academy for his eighth-grade experience. He has attended a hybrid program that involves three days at the school and two learning online. Her second oldest, Ashton, has attended school online due to health limitations.

“Ashton doesn’t do well with the mask, and we wanted to avoid the chance of him developing more complications, so he does his school work in his dad’s office,” Kerri said. “After this semester, we will make the decision whether to keep him in online school or possibly send him to The Island School because of its small student body.”

Meanwhile, Logan’s school has kept the students in small clusters, which has eased Kerri’s mind.

“We chose a smaller school for Logan to attend this year, so it’s less likely for his exposure to come home with him.”

Kerri has not been as concerned about the virus as about a possible school closure. In the meantime, the boys have taken their transitions in stride.

Local parent Jill Chatham has seen her two children rise above what she thought might be a difficult adjustment to school. Her daughter, Charlotte, started her first year at Lemon Bay High School with ease.

“She’s had no problem wearing a mask each day. The school has also spaced the desks in their classrooms,” said Jill.

Her son David has also enjoyed returning for his last year at The Island School.

“The school has handled the opening well, including taking the students’ temperatures each day. Overall, I think it’s important for kids to get back into their own routines. My husband and I are happy to see their mental health improve,” Jill said.

As students clad in masks fall into place, the parents will continue to remain positive and set an optimistic example for their youngsters.