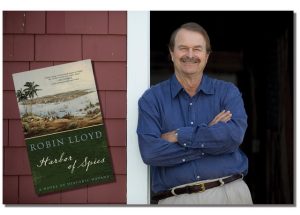 Journalist and author Robin Lloyd will visit Boca Grande on Thursday, December 13 to give a presentation on his most recent book, “Harbor of Spies: A Novel of Historic Havana.”

The presentation will take place at 4 p.m. in the Boca Grande Community Center auditorium.

This book would appeal to Civil War enthusiasts. It’s an historical novel set in Havana in 1863 during the American Civil War, when the Spanish colonial city was alive with intrigue and war-related espionage. The protagonist – a young American ship captain by the name of Everett Townsend – is pulled into the war, not as a Naval Academy midshipman, as he had once hoped, but as the captain of a Havana-based blockade-running schooner.

“When doing the research for the book, I didn’t anticipate writing about Cuba, but then I became fascinated with steamship transportation and how that was the main form of transporting goods in those days,” Lloyd said. “The plot evolved into looking at the profiteering of the Civil War and how Cuba became involved.”

The novel is a richly drawn portrait of Spanish colonial Havana in the days when Cuba was flush with sugar wealth. It also provides a realistic look at the naval blockade-runners who helped form the supply line into the South’s Gulf ports. Blockade running in the Gulf of Mexico in the early years of the Civil War was an important role that sailing schooners played in bringing arms and ammunition into the shallow harbors, bays and inlets that line the Gulf Coast from Florida to Texas.

Lloyd’s first book, “Rough Passages to London: A Sea Captain’s Tale,” is partly based on fact. It’s a story of the sea and the tall ships that sailed the North Atlantic in the 1800s. He hadn’t planned to write a novel when he began reading about his ancestor, Elisha Ely Morgan — who knew Charles Dickens and Queen Victoria. Morgan is a young farm boy who has witnessed firsthand the terror of the War of 1812. When he learns that his older brother is lost at sea, he boards a ship en route from New York to London, a route he hopes will lead to his vanished brother.

The historical novelist formerly worked as a television journalist in Miami for 20 years. He also was a foreign correspondent for NBC, reporting mostly from Latin America and Africa. He also covered the White House during the Reagan and Bush administrations.

A reception and book signing will follow the presentation. This program is part of the Johann Fust Community Library Foundation 2018-2019 Literary Series. There is no charge to attend the event, and all are invited.

Newer Post‘Rescue Me’: A night of fun for the Suncoast capital campaign
Older PostProfile: Hal Coxon