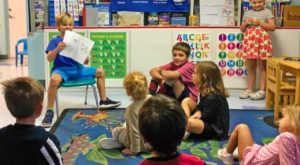 Hampton Boney, a first-grade student at The Island School in Boca Grande, recently had his first book published, and he will soon have an official book signing under his belt. His book,“500-Pound Tarpon,” is a story based on a dream that Hampton had last year. In the story, he catches a 500-pound tarpon, breaking the record for the biggest fish ever caught of that species.

His vivid memories from that dream inspired him to write and illustrate the story, with the hope that it might be able to help scientists at Mote Marine Laboratory in Sarasota continue their important work with red tide research. Hampton is giving 10 percent of his proceeds from the book to Mote Marine.

The 7-year-old author is enthusiastic about all things fishing. He loves the water, and his goal is to one day become a marine biologist. Though he dreams of catching a gigantic tarpon one day, he is proud of the juvenile one he caught in the creek behind his house.

The Tide gift shop will be hosting a book-signing event with Hampton on Saturday, Oct. 19 from noon to 2 p.m. To order a copy and have it delivered to you, email Hampton’s mom at annaboney@gmail.com.