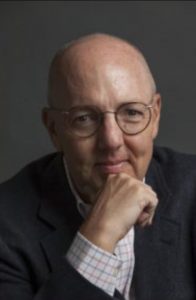 Retired lawyer and author Fred Rich will be speaking at the Johann Fust Community Library at 4 p.m. on Tuesday, Jan. 8.

He is the author of two books: “Getting to Green” and “Christian Nation.”

Rich was a partner of the New York law firm Sullivan & Cromwell. In 2014, having reached the peak of his profession, he abruptly announced to his surprised partners and clients that he was switching careers. And therein lies a story.

Rich said reading is what inspired him to start writing.

“I wrote two novels during and after my time in law school, which were wisely set aside,” he said. “As I’ll discuss in some detail at the library, it was John McCain’s nomination of Sarah Palin, and all that it implied about the course of politics in this country, that set me on the course to write my first published book.”

The author said he is mainly interested in topical issues that have a moral dimension but are not getting sufficient attention.

“One of the themes of my first book was the individual moral responsibility we all have when politics start to head in a dark direction,” he said. “In the second book, about the environmental movement, I frame conservation issues as science-based but also having a distinct moral dimension – i.e., does anyone, regardless of their politics, really think it is morally acceptable to trash the planet we leave to our children just to make a marginal buck today?”

Rich – who does a two-month writing retreat each year here on Gasparilla Island – is an author who says his writing, both fiction and nonfiction, is meant to probe contemporary political and moral issues from a fresh perspective. He describes that perspective as “independent, nonpartisan and pragmatic.”

His recent book, “Getting to Green, Saving Nature: A Bipartisan Solution,” published in 2016, tells the story of how the American environmental movement lost its way and explains how it can get back on track. The book exudes a call for conservatives to reconnect with their long tradition of support for conservation and for the “Green” movement to adopt the reforms necessary to restore bipartisan support for the environmental agenda.

Rich’s talk will focus on becoming an author later in life.

His first book, “Christian Nation,” published 2013, is a work of speculative fiction that considered the political ambitions of Christian fundamentalism in America.

Rich just finished his third book, a novel, which deals with the question of whether humanity is ready to wield wisely the power of genetic editing.

“In the novel, a narcissistic scientist ‘de-extincts’ a Neanderthal, who is then hidden until age 15. When his existence is revealed, the world has to deal with the question of how and why Neanderthals became extinct in the first place, and the implications of sharing the planet with another sentient, intelligent, hominid species.”

Rich will weave the story of these books into the narrative of his career path and also give the Fust Library audience the first public description of his third work.

The program is free, and all are invited.

Newer PostCoffee with a scientist, anyone?
Older PostRoyal Palm Players presents ‘A View from the Bridge’ for Lit Forum’s January meeting