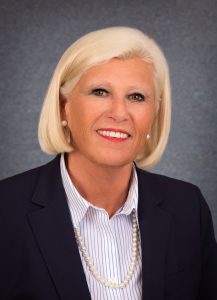 BY MARCY SHORTUSE – The friendly smile and platinum hair that has become so synonymous with Boca Grande Health Clinic Chief Executive Officer Hilja Bilodeau’s presence on the island will be disappearing soon, as she will be retiring this year. After facilitating many very positive changes at the Health Clinic and Annex, she is leaving with a proud feeling in her heart.

Hilja came to Boca Grande with a long and distinguished healthcare career, beginning with her training and clinical work as a registered nurse at Brigham & Women’s Hospital. Prior to coming to Florida her most recent executive position had been with Harbor Medical Associates in Weymouth, Mass, where she was a senior vice president for a mid-size physician group for 19 years in a suburb of Boston.

While working in Massachusetts, she had a conversation with a colleague during a conference call one afternoon and learned about the CEO vacancy at Boca Grande Health Clinic. She called to inquire about the position, and the moon and stars aligned.

Hilja and her husband, Paul, live in Rotonda. They purchased property there several years ago and had a house built with plans to eventually retire in the area.Paul is a retired firefighter/captain and also owned a side business as an electrician. Hilja and Paul have three adult children: Paul Jr., Thomas and Holly.

Dr. Daly Walker, the chairman of the board of the Clinic, has nothing but good things to say about the changes Hilja has brought about at our island healthcare facilities.

“Hilja has been an outstanding CEO of the Boca Grande Health Clinic,” he said. “Under her leadership the Clinic has grown and flourished, and the quality of care delivered to its patients is the highest it has been in the 70 years the institution has been serving the island. Hilja is winding down a distinguished career in medicine that included years as an intensive care nurse at Peter Bent Brigham Hospital in Boston, and then as an administrator in a New England health care system.

“Hilja has the heart of a nurse and always puts the patient first. Those of us associated iwth the clinic and its patients will miss her.”

Boca Grande residents are invited to attend an open house on Wednesday, Feb. 19 from 4:30 to 6 p.m. to tour the renovations that were made this summer to the Annex and Boca Grande Health Clinic buildings.

Light hors d’oeuvres will be served. Please RSVP to Devin at Devin.Schott@bghc.org. The Boca Grande Health Clinic and Annex are located across the street from one another at 320 Park Ave., Boca Grande.

Newer PostHistory Bytes with Milton Bell: The song of the whistle buoy, and hams that tasted fishy
Older PostPosh, 31, easy on the eyes and fearless: Meet Lynne Olson