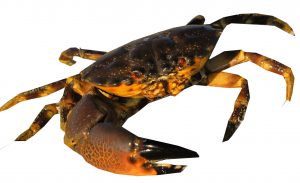 It’s officially stone crab season, and Dr. Phil Gravinese, a scientist at Mote Marine Laboratory in Sarasota, said early testing has revealed catches close to shore have not been great.

“Decomposing fish pull oxygen from the water, and that increases stress levels in the crabs,” Gravinese said.

Fish and Wildlife Research Institute Public Information Specialist Michelle Kerr said this year’s pre-season catch was low in most areas being similar to last year’s catch at this time of year.

”We are concerned about the low catches in the region impacted by red tide (Naples to Tampa Bay),” Kerr said. “In August, we started a pre-season collaboration with commercial stone crab fishermen out of Pine Island to sample offshore of Sanibel. The results of that effort show the near shore catch was impacted by the algal bloom. The

effect appeared to decrease as we sampled further offshore.”

However, in discussions with the commercial fishermen, the catch rates were below what they would expect. Several fishermen in the region have said that they will either not fish or start the season deploying half of their traps and focus those traps further offshore than they would normally fish at the start of the season.

Florida Fish and Wildlife Conservation Commission has confirmed that parts of certain shellfish are not affected by red tide and the organisms are fit for human consumption.

“Edible parts of animals commonly referred to as shellfish (crabs, shrimp and lobsters) are not affected by the red tide and can be eaten,” a report stated.

“Eating the muscle and tissue of the crab is fine because you are not consuming any of the organs, where the animal can carry traces of red tide,” Gravinese said.

In Florida, stone crabs are legal to harvest from October 15 to May 15, and while this season might be more challenging due to water quality, fisherman are staying ahead of the game and placing traps father out into deeper water to increase their chances of a good catch.

The Fish and Wildlife Research Institute, with funding from the Florida legislature, is conducting a long-term program to better understand the factors that control annual and local fluctuations in stone crab catching. FWRI crustacean fisheries staff recently designated eight locations along the Florida coast as study sites. In late August 2018, a sampling location near Pine Island was added to capture the effects of red tide on the stone crab population in that area.

The independent monitoring program report stated there were four different sites around Sanibel Island that were tested.

A total of 55 stone crabs were captured. Of those, 18 were female and 35 were male. Researchers also discovered 12 more that were dead. The traps were serviced every two weeks by counting the catch, determining the sex and assessing for injuries.

Recreational harvesting of bivalve mollusks such as hard clams, oysters and mussels from conditionally approved areas is banned during red tide closures; these organisms may not be legally harvested and, therefore, should not be eaten during any closure of a shellfish harvesting area.

To determine where or not harvesting of shellfish is permitted in an area, visit the Florida Department of Agriculture and Consumer Services website at freshfromflorida.com.

Legal-sized (harvestable size) claws are 2 ¾-inches or greater in propodus length (at the joint of the elbow). Both claws can be lawfully harvested if they are of legal size, although it is discouraged because the practice leaves the crab defenseless from predators. Harvesting of egg-bearing crabs is prohibited.