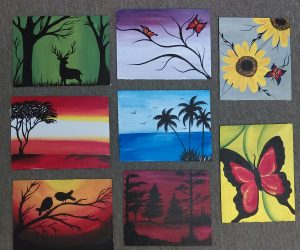 Smart Studios is once again holding their annual charity show called “Art for Education, which benefits Haitian children in the Dominican Republic.

On display at the shop, located on Park Avenue, will be paintings donated by the school children of La Vega Christian School. Owner Gail Cleveland’s sister Debbie and her husband, Mitch, are missionaries in the Dominican Republic and operate the La Vega school.

“In 2011 they helped build a school for Haitian children, now they are supervising and funding 10 schools serving over 500 children!” Gail said.

It is estimated one million Haitian children live in the DR.

“They face many barriers to attending a public school,” Gail explained. “They often do not have legal documentation. Schools are overcrowded. The language and culture are different. Often the costs of a uniform, shoes and school supplies are beyond the reach of their immigrant parents.”

Visitors to the Smart Studio will also have the opportunity to choose a student to sponsor. For $25 a month a child can attend school where they can begin to lear

n, have friends, and teachers who love them. For them it is, in the words of one of the Haitian pastors, “a little piece of heaven.”

The show will be on display April 1 through 16. All of the proceeds from the children’s artwork – 100 percent – will go to the school children.

You also won’t want to miss Smart Studio’s annual birthday sale, going on Friday and Saturday, March 17 and 18, only. Prices are 20 to 50 percent discounted storewide to celebrate Wini’s birthday.