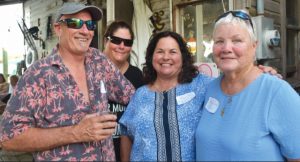 ■ On Tuesday, Feb. 12 the members of the Gasparilla Island Maritime Museum gathered together to honor those who have contributed to the ongoing dock restoration at Whidden’s Marina, and those who helped to fund the project. A new look for the interior historical rooms of the museum/marina was also presented.

Michael Hayman came to serenade the crowd (pictured at left with Melissa Joiner Steyer, Karen Kelley and Betsy Joiner), there were refreshments and a raffle..