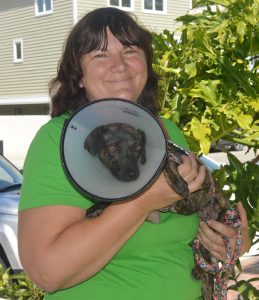 Tank’s Legacy, a local 501(c)3 pet rescue organization that works to save animals scheduled to be euthanized, is asking area supporters for help.

Recently, some members of the organization traveled to Hernando County to rescue a pot-bellied pig that was scheduled to be euthanized the next day.

The following day they drove to Clewiston Animal Control to save two little female dogs.

Blanche Vedette, founder of the organization, refuses to turn down helping any animal whenever possible. And she usually does it on her own, bringing the animals back to her property in North Port, where she feeds and cares for them and gets them veterinary treatment if needed.

On a recent Saturday, while the group was on the way to Boca Grande to participate in the annual bike parade, the transport van broke down.

“The gentlemen from Tokie’s Broken Bike shop in Port Charlotte helped push the van so it could get towed,” Vedette said.

It’s currently sitting at Englewood Automotive Collision Center. The estimate is $3,000 for a used low-mileage motor.

The rescue relies on this van so volunteers can participate in adoption events and rescue pets and other wildlife. Because the rescue is in an area where the risk of wildfire is higher, this is also the means of evacuation in an emergency. Supporters can help by making a tax-deductible donation to Tank’s Legacy and note that it is for van repairs.

The rescue currently has seven dogs and three cats.

Blanche regularly brings the pets to socialize with visitors at businesses in Boca Grande. She recently brought Pepper in for a visit to the Boca Beacon office. Pepper is a cute 1-year-old Italian greyhound mix that was rescued from Clewiston and is now ready to adopt.

The nonprofit organization recently hosted an adoption event at Pet Supermarket in Venice. There will be more events scheduled soon. Check the Facebook page for details.

“It takes some strength to unload tables and animals and get them set up at the adoption stations where they can socialize with potential new families,” she said.

Blanche founded the organization and it was named after Tank, a neglected stray dog she picked up at a local shelter.

“I took him home immediately. We got him treated for heartworm, flea dermatitis and staph infections,” she said. “Time food, and love healed the rest.” While visiting the veterinarian, it was discovered that Tank had also been shot twice in the stomach and lived. “Treatment bought us about 9 months, and I treasured every moment. He will always be my boy. He was the father figure for the pack; every dog that came in was guided by him.”

For more information, search for Tank’s Legacy on Facebook.