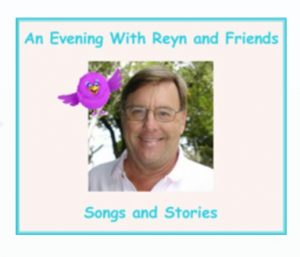 The Royal Palm Players will be hosting “An evening with Reyn and Friends,” featuring Reyn Guyer and collaborator Jeff Harrington on April 12 and 13 at 7:30 p.m. at the Boca Grande Community Center auditorium.

Guyer and Harrington will sing songs from their collection as well as a few other surprises.

“We’re going to perform 17 songs that I have written and put together with Jeff,” Guyer said. “Some will be pulled from a musical he and I wrote together years ago.”

RPP’s Kids’ Drama Club will join the fun on stage for a number or two. The show will feature island favorites Joan Ardrey, James Martin, Elaine Skypala and Grande Glee Music Director Sharon Pointe, along with Jeff and Reyn. This will be an evening to remember and one that fans of local performers won’t want to miss.

“The six of us – along with the kids – are practicing daily for the April shows,” Reyn said. “We think it will be a lot of fun. We’re going to be doing the children’s songs early on in the shows so the kids won’t have to stay too late.”

Guyer is a native of St. Paul, Minnesota. He and his wife Mary have five children, ten grandchildren and two great-grandchildren. He is a serial entrepreneur in a variety of creative fields, including toys and games, music publishing, education and art. Having struggled with dyslexia, he cofounded Winsor Learning in 1991 to help children who also struggle to read. The Sonday System and Let’s Play Learn are effective remediation methods for students who are behind in their reading skills. These programs are used in hundreds of school systems across the country.

Reyn’s love for music led him to co-found Wren-song Music in 1986. The publishing company has had many number one singles and won a Grammy and two CMA song-of-the-year awards. Other projects that keep Guyer busy include “The Curly Lasagna project,” a series of stories and songs for kids and parents that he created with Jeff Harrington, and creating sculptures and artwork, many of which are in private collections.

Guyer plans to make the April events interactive with the audience.

“We are going to discuss how songs originally get started, and the stories behind them and how the words get turned into music,” Reyn said.

Tickets are $35 and are available at the Royal Palm Player’s box office at 131 First Street in Boca Grande or via royalpalmplayers.com.