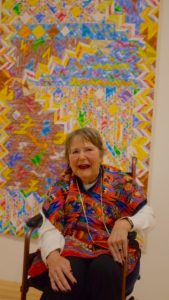 BY OLIVIA CAMERON – The Museum of Contemporary Art in Los Angeles is currently displaying the artwork a Boca Grande resident and woman of history. Susan Michod is part of the show called “With Pleasure: Pattern and Decoration in American Art 1972-1985.”

Michod has led the “pattern and decoration” movement since 1969. This movement surfaced from the feminist art movement of the 1960s, and it signifies the importance of decoration in the production of art. Michod is one of the five leaders of the movement, along with Valerie Jaudon, Joyce Kozloff, Robert Kushner and Miriam Schapiro.

Susan earned her master’s degree in fine arts after attending both Pratt Institute in Brooklyn and the University of Michigan, where she met her current husband, Charles Michod. The pair moved to Chicago but spends a few months of the year living in Boca Grande when they get tired of the negative degree readings.

“We celebrated out 50th wedding anniversary this past year,” said Charles. “It’s been easy with Susan, and she’s a phenomenal artist.”

As a feminist painter, she is the co-founder of the Artemisia Gallery in Chicago, a women’s collaborative exhibit to highlight the work of women without being compared to the work of men. Female artists including Schapiro and Kolzoff have showed their pieces in the Gallery.

When approached with the opportunity to be part of “With Pleasure” at MOCA, Susan couldn’t stay out of it. Exhibit Curator Anna Katz visited to discuss the show. “She came over and spent two days with me,” Susan said.

Her displayed art at MOCA is a piece titled “Green Fog,” painted in 1978. The painting catches the eye of the viewer with its jagged lines and vivid colors.

“I used little stamps to paint the blue and brown on the canvas, and then added some color,” said Susan. The vibrant yellow edge of the painting encompasses the dynamic pattern.

Her art of the pattern and decoration movement has a mixture of indigenous traditional patterns and compelling abstract detail. Her acrylic piece entitled “Azteca Shroud,” created in 2003, produces a visionary wave of color and detail, like a pool of a native pattern.

“It would take every day for six weeks to make one piece,” says Susan.

Her work takes extensive time and concentration, but her husband believes it’s worth it.

“You immerse yourself in her paintings,” said Charles. “It’s musical.”

Their residence in Boca Grande is also home to a selection of Susan’s work. The Michod pair is also involved in the art shows and clubs on the island.

“We’re involved in everything artistic,” says Susan. She explains that there is no reason not to be involved in the Boca art programs.

Her work has been featured in institutions including the Art Institute of Chicago, the Queens Museum, the Bronx Museum of the Arts and the National Academy in New York City.

Susan Michod continues to support feminism in the arts as her artwork resides in MOCA. The exhibit will also be showcased at the Hessel Museum of Art at Bard College from June 27 to November 29.