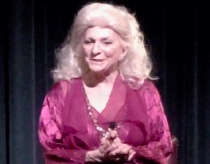 Thanks to Pia Lindstrom and the Friends of Boca Grande Community Center, an overflow crowd of islanders and guests were privileged to “eavesdrop” on a delightful conversation between Pia and her longtime friend, singer/songwriter/author/pianist/guitarist and raconteur Judy Collins on Sunday, Feb. 24.

Not that the audience didn’t get involved in the conversation. Outfitted in a fashionable mauve floor-length dress that would not have been out of place at the Academy Awards ceremonies, and comfortably seated in one of the two leather chairs on center stage, Judy announced that “I had an affair with Stephen Sills when I was young.” The audience burst out laughing and applauding, to which Judy responded: “Oh, you know about that already?”

The two ladies continued in a dialogue that was relaxed and bantering but touched on many of the lows in Judy’s life as well as the highs. Born in Seattle on May 1, 1939, Judy suffered through a bout of polio at age 11 and was hospitalized for two months. She recovered completely. At age 23 she somehow contracted tuberculosis and spent another six months in a sanatorium before being declared disease-free. She also had serious confrontations with bulimia, alcohol addiction and depression during the 1970s, still early in her career.

Judy remembered her very first public appearance when she was a youngster, traveling with her father, a blind singer and piano player. “It was in Butte, Montana. I sang ‘I’ll be home for Christmas.’ ” At this point Judy sang a cappella to her Boca Grande listeners a few bars of that well-known Christmas song. “The trouble is,” she continued, “it was in April.”

Judy began her real career in music as a classical pianist under the tutelage of noted conductor and instructor Antonia Brico, who was the first woman ever to conduct the New York Philharmonic. “She was a strict teacher,” Judy remembered. “I was making my public debut (at age 13), and she told me to learn Mozart’s Concerto for Two Pianos by heart. “I said I couldn’t, because we were relocating to Denver and I wouldn’t have time. Well, she made me a cardboard keyboard, and I sat in the back seat of our car on the trip to Denver and learned Mozart’s Concerto.”

Brico was distraught when Judy decided to take up the guitar. Years later, when Judy was an established star, she invited her former teacher to a concert in Denver. “After the show she came into my dressing room, and she gave me a hug,” Judy said, “and then she took my hands in hers and looked at my fingers. And she said, wistfully, ‘You really could have gone places …”

In her discourse with Pia, Judy pointed out that going places – on tour, that is – was hard work. Hours of practice. Refining schedules. Refining songs and presentation. Rushing from one city to another. “On the road,” she said, “we did about 120 days a year.” That’s one show every three days, on average. But Judy loved it.

The hardest period in her life came when Judy’s son Clark committed suicide in 1992 after a lengthy struggle with drugs and depression. “I was ready to give it all up,” she recalled. But during this period of grieving she received a phone call from a friend who had lost a child to suicide. “She told me, ‘No guilt. You couldn’t have prevented it. Even if you did, it might have taken place later.’ And she told me to keep working; it was the best remedy.”

Judy agreed that her friend was right, and she’s never stopped. “I need to keep doing things: writing, playing, singing, composing,” she said. That work has produced numerous accolades and awards during her long career. Judy was honored with a doctorate in fine arts by Pratt Institute in 2009, and she’s had four Grammy nominations for folk music, one for best folk album and one for best female pop vocal performance. She received an Academy Award nomination for a documentary on her piano teacher, Antonia. She’s appeared on the “Muppets Show” and “Sesame Street” shows for kids, and she’s the author of three books relating to her life and career. She also sang at President Bill Clinton’s inauguration. The tune: “Amazing Grace.”

As her conversation with Pia came to a close, Judy introduced the audience to her husband, Louis Nelson, who is famous for having designed the mural wall for the Korean War Veterans Memorial on the National Mall in Washington, D.C. She then treated the crowd to a reprise of “Amazing Grace,” and after the first verse, she beckoned the audience to rise and join in singing the second verse. It was a tender moment, followed by a standing ovation. For the 260 islanders and guests in the audience, it was their way of saying, “Amazing Judy.”