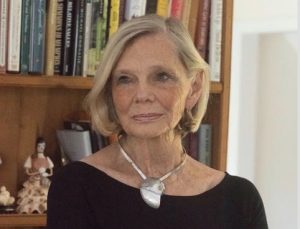 It started out as a memoir in the 1990s. Alice Gorman began to chronicle her life.

“I sent the manuscript to an editor who had been one of my fiction teachers, and asked if he thought it was worth publishing,” Gorman said. “He quickly replied ‘Yes’ – it was actually his idea to name the heroine Valeria Vose.”

Valeria was actually a name in her mother’s Tennessee family back in the 1800s.

“I had heard it as a child and I thought it was a fascinating, exotic name.”

And Vose is a New England name, and the character in the book who plays her husband is from Providence.

“It began as a memoir, but I can honestly say it ended up being autobiographical fiction,” Gorman said. “So it’s pretty much a story of my life, but there are characters and scenes that are fiction, which deepen the story.”

The story is about a privileged, southern woman approaching age 40, and her seemingly perfect life is shattered. Determined to survive, she’s forced to confront all preconceived values and expectations in order to find a path toward creative, spiritual independence and her true identity.

“There’s a lot of dialog in my book,” Gorman said.

Gorman said the two sides of writing the book were equally fascinating.

“The creative, imaginative part is fun, and then the editing process is very analytical,” she said.

“I really believe in writing from the combination of the mind and the heart.”

Gorman attended graduate school in 2002 with the intent to learn more about writing techniques and a goal to eventually publish the memoir.

She attended Spaulding University in Louisville, Kentucky, and that was a result from a direct experience that occurred at the Johann Fust Community Library in Boca Grande.

During a tough period in her life, a friend sent her a copy of the book “Ahab’s Wife.” And the book had a profound impact on Gorman.

The next time she visited Boca Grande, she learned that the author, Sena Jeter Naslund, was going to be speaking at the library. She went to the event, and learned the author was starting a low residency graduate school for writers.

“My heart jumped out of my chest – I knew I had to do it,” Gorman said.

Two years later, she was accepted into the program.

She said she hopes readers will find that the book is fun, butshe also hopes it has some meaning to people.
“It’s a good story, but at the same time, I would love to think it was helpful to someone.”

Gorman is a writer of fiction, nonfiction and poetry. Her writing has been published in Vogue, O, the Oprah Magazine, O’s Little Book of Love and Friendship, The Louisville Review and countless regional periodicals and art publications. Born and raised in Memphis, Tennessee, she divides her time between Maine and Florida. Valeria Vose is her first novel.

And to wondering fans – yes – she is working on a second book.

Gorman will be speaking about her new book on Tuesday, February 12 at 4 p.m. at the Johann Fust Community Library. Books will be available for purchase and they are also available on Amazon.