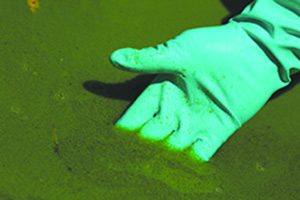 After years of research in more than six countries, ethno botanist Dr. Paul Cox has discovered a tiny organism found in algae that could be destroying our brains.

Cox was at the Boca Grande Community Center on Thursday, January 18, and the community was invited to view his documentary: “Toxic Puzzle: Hunt for the Hidden Killer.” 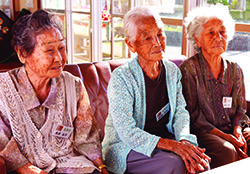 Centenarian women from Ogimi Village, renowned throughout Japan as “Longevity Village,” move like ballerinas and have absolute recall of their childhoods.Their major caloric intake comes from foods rich in the amino acid L-serine. Photo by Dr. Paul CoxThe film follows Cox on a four-year research project hoping to find a solution that scientists have sought for years: a cure for degenerative diseases of the brain.

Through his work, Cox identified an algal bloom in water that contains a toxic organism called cyanobacterium.

The study shows that there are areas of the country where there are elevated numbers of ALS cases when the environment has exposed people to the cyanobacteria.

“It’s in the water, air and food that gets consumed,” he said. “For example, wheat crops that have been irrigated with water that contains the toxin carry it through to the food products.”

The answer, he said, is not to swim in or drink water that contains algae. Or better yet, clean our local lakes and waterways, but that would require money and political action.

As one of the world’s leading ethno- botanists, Cox has traveled to small, remote villages around the world searching for new medicines. 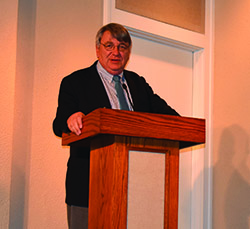 One study was completed in a remote village in Japan where it’s common for people live 100+ years.

Scientists dissected parts of plants that were commonly consumed by the people there, and they found that the foods were rich in the amino acid L-serine, which plays a central role in cellular proliferation.

Cox and his team completed a study with ALS patients and found that they regained some motor skills after daily consumption of L-serine. A natural protein component that is found in tofu, eggs and sweet potatoes, L-serine counteracts the toxin.

“Food markets in Japan carry products with high L-serine, and they have the oldest populations of people with the highest memory recollection,” Cox said.

Cox received his doctorate in biology from Harvard University. At one time he thought of going to medical school, but he said he’d rather take the risk of finding the answer to help thousands of people in the future, rather than just treat a few as a practicing physician.

A Q&A session with the scientist followed the documentary.

“Toxic Puzzle” is a movie by independent film producer Bo Landin, who has created documentary films in the fields of natural history, science and the environment for National Geographic, Discovery Channel, and BBC.

The movie has been chosen for prominent film festivals and screened around the world.

Cox earned recognition from Time magazine as one of 11 “Heroes of Medicine.”

He was awarded the Goldman Environmental Prize, sometimes known as the Nobel Prize of the Environment.

He has published more than 200 scientific papers and is currently the director of the Brain Chemistry Labs in Jackson Hole, Wyoming.