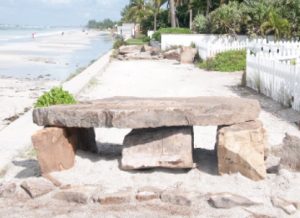 If you’re a regular Boca Grande beachgoer, you may have noticed a new addition to our already crowded Promenade. A Stonehenge-type obstacle (shown at right) has now been placed right in the walkway at 3rd Street heading north from the beach, obviously meant to keep us from our right to use the Promenade. According to Lee County, there’s nothing they can do about it.

According to Lee County Communications Specialist Tim Engstrom, there isn’t any county agency to enforce the deed that was put in place in 1927.

“Based upon the pictures provided, it appears that some rocks are what is at issue. The placing of rocks does not require a permit from the County.”

This goes against the deed of ownership issued in 1927 that specifically states the land is to be used freely by all owners of property in Boca Grande, their families and guests. The deal was struck, and the property that runs from 1st Street north to 4th Street – a property that has been called the Promenade since the 1800s – was transferred from the Boca Grande Corporation to the Boca Grande Associates, Inc. for $1.

It used to be clearly delineated, but now a number of plantings and rocks have been placed in the way by residents who apparently don’t want the public near their homes.

To add to the confusion, in July we wrote about this same problem, and Lee County’s opinion then was to say this deed still holds up in court.

“Per the deed, nothing is supposed to be built or erected in the Promenade,” said Lee County Communications Director Betsy Clayton on July 1 in an email. “The pathway is supposed to remain clear. Typically we notice that individuals in the community remind each other that private citizens are not supposed to plant plants or place items in the Promenade, but when there is a path with nothing obstructing it, sometimes we do not receive complaints.”

Last year the Promenade was discussed at the April meeting of the Boca Grande Historic Preservation Board after some residents received letters from Code Enforcement and threats of fines for impeding the path.

One letter to the editor received earlier in the summer addressed the issue quite succinctly. It said:

“Enforcement is so vigilant in protecting the pedestrian right-of-way in the village by forcing removal of obstructing amenities such as sidewalk cafe seating and attractive flower boxes in front of retail shop display windows, yet they ignore obstructions such as large boulders and shrubbery purposely placed by property owners in the Gulf-front pedestrian Promenade right-of-way between 1st St. and 4th St.”

Newer PostVeterans Day remembrances: Two local veterans tell their stories of war
Older Post‘The Price of Everything’ documentary to be featured at the community center