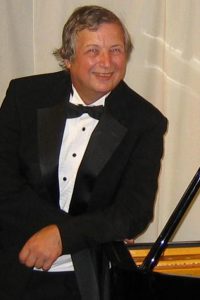 Boca Grande music fans are in for a treat on Friday, Jan. 13. Friends of Boca Grande will be hosting the 2017 Coconut Cabaret featuring Bob Milne, who will be performing ragtime tunes from a musical genre that peaked between 1895 and 1918.

Milne has often been called a “one-man orchestra,” referring to his exuberant and complex interpretations.

His fans say that when he plays the piano, he can make it sound like six instruments.

“Emerson has been key. He introduced Friends of Boca Grande to Bob Milne and is a co-sponsor of Bob’s performance on Jan. 13,” Frank said. The show will be themed, “A Night in the Barrelhouse.”

This will be Milne’s second time peforming in Boca Grande. Last year, he played at The Gasparilla Inn & Club.

“I first heard Bob work his piano magic about five years ago, when he performed at the Opera House in Boothbay Harbor. My wife Barbara and I instantly felt that we somehow needed to get Bob to come share his incredible talent with Boca Grande. Juggling and coordinating schedules, we finally got Bob here to do a dinner party last winter. To say that the guests raved is an understatement. Tony Fairbanks was so enthusiastic that he spent hours online that night researching Bob’s music and purchasing every available recording. Tony said that he wanted to participate in sponsoring any future Boca Grande performances. We’re both thrilled to have Bob performing here,” Wickwire said.

Milne will be playing music from the ragtime era that includes boogie-woogie and blues.

“I’ve been playing these styles since about 1966. I like it because the music is not trite by any means, it’s enjoyed by everyone, and it’s fun to play,” Milne said. Milne has performed private shows for George and Barbara Bush several times in the past.

Table snacks, napkins and cups will be provided for guests. Attendees are welcome to bring their own beverages. Seating is assigned on a first- come, first-served basis. Contact Debbie Frank at the Community Center if you have special seating requests.

The 5 p.m. show is already sold out. There are still some tickets left for the 8 p.m. performance. The Crowninshield Community House is located at 240 Banyan Street.