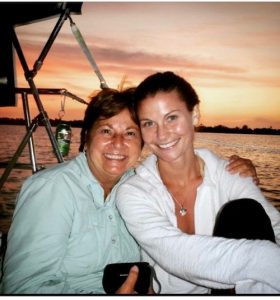 BY OLIVIA CAMERON – A sweet and beautiful face that not long ago was often seen on the streets of Boca Grande – and who happens to be the daughter of the Boca Beacon’s office manager, Karen Clark – needs some help while trying to recover from a horrific injury sustained in an accident.

Tara Clark, a young woman living on her own, is now living in a nursing facility after her unexpected injury. Karen is devastated about her daughter’s recent accident, particularly since she has had to go through most of it on her own because of COVID-19-related issues and travel.

On March 15 Tara was snowboarding with friends when she fell on a snow-covered deadfall of brush and was impaled by a seven-inch stick. After being airlifted from the mountain to the closest trauma center, she underwent surgery to remove the foreign object. As a result of the accident, Tara has endured nerve damage in her right leg and drop foot in her right foot.

About five days after the accident, Tara was released and provided with at-home nursing. For some reason, though, her pain levels continued to rise, and no one knew why. Tara was re-admitted to the emergency room, where an evaluation revealed a foreign body that hadn’t been found during her initial surgery.

On May 11 Tara’s second surgeon successfully removed a two-inch piece of wood from the wound. Since her recurring surgeries, Tara has been recovering with in a nursing facility. Tara’s spirits have waned, knowing that full recovery of her mobility could take up to a year or longer.

At present she must use a walker or wheelchair to get around. The nerve damage involves slow regeneration, foreshadowing a slow recovery.

“She’s doing everything she can every day to get stronger,” said Karen.“Tara is still in a nursing facility and will be going home by the end of the month.”

Her mother, Karen, isn’t allowed to travel because of her compromised immune system in the face of the COVID-19 risk. On top of that, like a perfect storm, the COVID pandemic raised hospital safety precautions to the point of declining visitors when Tara was hospitalized.

A phone call just won’t do when it comes to physical comfort, and Karen is upset by her inability to be by Tara’s side.

Luckily Tara’s sister, Kim Caldroney, has been her main support system through her recovery. Kim lives out west as well, and runs a pet-sitting business that has employees and clients in Boca Grande.

“I can’t even be there for either of my daughters,” Karen lamented.  “A six-month recovery would be a miracle. Her recovery is the priority. I’m doing everything I can to get her the best care possible.”

Shortly after her injury, Tara’s friend and coworker, Justin Hayes, created a GoFundMe page on her behalf for donations to lessen the financial burden of her significant medical bills. It was a struggle to get Tara to allow the page to be made, but the cost of the mounting pile of bills – as well as the fact she will need skilled nursing at home – will be far too much for the family to deal with. 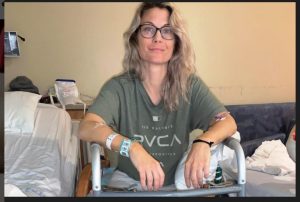 Prior to moving out west, Tara wore many hats as a Southwest Florida local. She was employed on the island as a front desk clerk and water aerobics instructor for The Gasparilla Inn & Club, as a golf course beverage cart operator, a reporter for the Boca Beacon, a retail clerk at Boca Grande Outfitters, a retail clerk at The Palm on Park and stewardess for the yacht Hillarium.

After moving to Idaho, Tara was a full-time marketing specialist at Cushman & Wakefield/Pacific Commercial Advisors.

Just this week the Boca Grande Firefighter’s Association gave a donation to Tara’s fund, for which the family is very appreciative.

To donate or receive updates, visit Tara’s GoFundMe page at gofundme.com/f/tara-clark. Donations may also be made to Tara c/o The Beacon, PO Box 313, Boca Grande 33921.

Newer PostA message from the Clinic: A history of masks throughout the ages
Older PostWhere to go when you’re feeling more ‘farm to table’ than ‘grocery store’