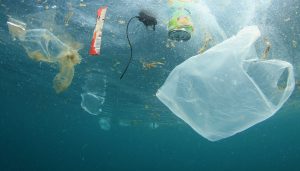 BY STEVIE KIM-RUBELL- In honor of World Oceans Day and Capitol Hill Oceans Week, Bonefish & Tarpon Trust Youth Ambassador Stevie Kim-Rubell wrote an essay on the Unites States’ recycling crisis, and the ways in which we can all reduce our plastic use. This was written in conjunction with World Oceans Day, which takes place in June of every year.

It can be found everywhere — from kitchens to emergency rooms to whale stomachs, plastic has become a part of almost every aspect of our lives. Our mass production of plastic has grown exponentially, and so has the amount of plastic pollution on our planet. Plastic now overwhelms oceans, landfills, and recycling plants across the globe.  Every year, plastic kills over 100,000 marine animals and 1 million seabirds.  It is estimated that by the year 2050, there will be more plastic in the ocean than fish (by weight).  And it’s not just in marine animals.  We ingest it too.  New research shows that we may be consuming up to a credit card’s worth of plastic every week.  But how did this plastic crisis come to be?

• 1920s: Plastic’s popularity begins to surge, and it is used to make jewelry, golf balls, radios, and even textiles

• 1980s: Grocery stores start to switch over from paper to plastic bags.  Around this time, people begin to realize that the amount of plastic being produced has become a very big problem, and so recycling starts to take off.

• 1990s: We become so reliant on plastic that it is a part of all aspects of everyday life. From phones, to kitchen gadgets and even plumbing, it’s become nearly impossible to exist without it. Not only that, but plastic makes its way into doctors offices and emergency rooms. X-Rays, surgical instruments, and artificial plastic joint replacements are all made possible by plastic.

So, cutting our plastic consumption is easier said than done…

We can all agree that one of the most negative consequences of the Plastic Crisis is its impact on our oceans, but how does it get there in the first place?  When we recycle items or put them in the trash, we assume that they makes it to a landfill or recycling center.  That’s where we’re wrong.

We are all a part of the problem.

In an amazing podcast I listened to by NPR, they talked about how the recycling system actually works.  It completely changed my life.  I was always the one to tell people about the importance of recycling, and I had no idea that I was doing more harm than help.  In the United States, our recycling system is completely broken.  Most of what we put in our recycling bins doesn’t actually get recycled.  Why?

In the 1990s, China was sending lots of goods to the U.S. on large cargo ships.  On the way back, it seemed silly not to fill the empty ships with something, so we started to send our recycling on the ships back to China.  They saw an opportunity to buy our recycling in order to use it to produce other goods, and for awhile we had a good thing going.  China would deliver goods on cargo ships, and then pay us to take our recycling back. But in 2018, something drastically changed.

The Chinese manufacturers decided that it was too much work to use our recyclables. Not because they were being lazy, but because we were doing a terrible job of recycling. We left the caps on bottles and peanut butter in jars.  Ultimately, our failure to properly sort and rinse our recyclables resulted in this system falling apart all together. Now, with no country to replace China in taking our recyclables, recycling plants in the United States are overwhelmed with high demand, so much of what we put in our recycling bins won’t ever getting recycled.

With the knowledge that recycling isn’t actually getting recycled, what are our options? Properly cleaning out our plastics to recycle them could do more harm to the environment than good. Think about how much water it takes to completely clean out a jar of peanut butter (I mean spotless), and hot water uses fossil fuels which we know are earth’s worst enemy. Plus, recycling, even when the plastic is completely clean, is super expensive as it needs to be sorted and moved. It’s likely that your jar of peanut butter will need to travel halfway around the world before it can actually be recycled, and unfortunately, many countries have a history of just dumping unusable plastics into the ocean. That’s right, our recyclables have been purposefully dumped into the ocean. The vast majority of ocean plastics today did not come from the lone bottle blowing off of a dock…. it comes from our recycling bins.

For awhile, I thought this was the solution to the problem: to clean up the plastic in the ocean, one bottle at a time. What I failed to consider was that it was only a bandaid for a much larger issue. We could remove every piece of plastic from the seas today, but it wouldn’t be a permanent solution. Why? Because every minute, an entire garbage truck of plastic enters the ocean.  So, we’d clean it all up only to continue our pollution.

If individual beach cleanups are not the long term solution, then what is?

There are two parts to address to cure the plastic problem. The first part is dealing with the plastic that has already been discarded. Fortunately, there are already various projects in the works around the world to cleanup our oceans on a larger scale! The second is the plastic we are currently continuing to mass produce. While it’s good that we’re working every day to clean the plastic already in the oceans, we also need to decrease our production and use of plastic. If we cut down on our consumption, we will introduce less plastic into the ocean in the first place, which, when paired with cleanups, will make a huge difference over time. It may seem daunting now, but nothing is impossible when we work together!

For more information about the World Ocean’s Project, go to worldoceansday.org.

Newer PostOsprey pole replacement pending for south end
Older PostThe importance of filling in the holes: Volunteers work tirelessly to save people and turtles from danger on the beach