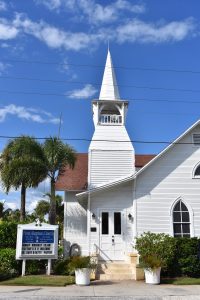 As a labor of love, a small congregation has worked to preserve an island landmark over the past century. The historic First Baptist Church of Boca Grande will in 2019 celebrate the 110th anniversary of its founding.

“I came here just to fill the pulpit, because they didn’t have anyone to minister at the time,” he said. “And that Sunday morning I felt a very strong calling to this church.”

The building was in severe disrepair at that time. The idea for a church in Boca Grande came about in the beginning of the 1900s. A phosphate company was established on the south end of Gasparilla Island, one of the barrier islands guarding the entrance to Charlotte Harbor. The phosphate was originally transported down the Peace River on barges and loaded onto ships at the southern tip of Gasparilla Island. As the phosphate company grew, the    Charlotte Harbor and Northern Railroad (CH&N) began to transport the phosphate to the loading dock. Along with the railroad came several other businesses, which were established in the little village of Boca Grande. Adding to these businesses were rail workers, permanent residents and tourists.

In 1909, the Reverend R. W. Harrell saw a need for a Christian Ministry for the community. He began to organize and constitute the island’s first church, which would ultimately be named the First Baptist Church of Boca Grande.

At that time, the church services were held when a visiting pastor (they were then called circuit riders) could get to the island. Most services were held outdoors, usually on the first and fourth Sundays of the month. Many parishioners travelled via boat to attend.

Between 1911 and 1913, a committee was formed to develop a plan for permanent construction of the first church building on the island. The congregation decided to secure a construction loan for $1,000. The loan was approved and obtained through the Southern Baptists State Missions Office in Jacksonville, Florida. The members started a building fund to help subsidize the loan. Charter members who helped in the support and establishment of the First Baptist Church of Boca Grande included Mrs. Howell, an island hotel operator; Mr. Holloway, owner of a local boarding house; Mr. W.H. Bell, a proprietor of the Tea Room in downtown Boca Grande; and Mr. J.M. Fouts, a railroad official who lived on the island.

In 1913, a parcel of property was acquired and ground was broken at the corner of Fourth Street and Gilchrist Avenue. Church members did much of the work themselves during the construction process. Many of the railroad workers and skilled professionals also helped. The steeple was constructed completely by hand by church members. The Seaboard Railroad donated a locomotive bell that still hangs on the steeple today. The First Baptist Church was completed in 1915 and is the oldest church structure in Boca Grande.

During that time, the Pilot Association was established to offer assistance to any ship coming into port whose master was not acquainted with the channels and required a local captain of competence. The Johnson family made up this association, and to this day, descendants of the original Johnson family are still members of the church congregation.

In 1915 the church doors opened, deacons were appointed, and a Sunday school was organized. The ladies of the church formed a Women’s Aid Society that aided in the care of visiting pastors. Throughout the growth of the church, these Christian women continued to contribute greatly to its work and ministry. The congregation continued to grow, and eventually an adult and a youth choir were formed and enjoyed by members. Many of the youth choir attended the Southern Baptist Youth Camp in Arcadia during the summer.

The church building not only served as a church but also was used by the members and other island residents as a center for informal socializing and other special events.

From 1911 to 1914, the congregation continued to be served by visiting pastors.

In 1934 a parsonage was constructed on the site, so the church could provide a home for a full-time pastor. The home was completed in 1935. The Reverend Perry Tomlinson received the call to pastor the church, and on May 8, 1935 a celebration dinner was held to dedicate the pastorium. The original structure is still on site today.

In 1995, as the congregation grew, two new Sunday school rooms were added.

In 2001, Pastor Beatty, with the help of a Georgia couple, began restoration of the garden situated between the church and parsonage. Today, with the help of many, the garden remains an area of beauty. In 2005 the garden was named the “Bob and Betty Lindner Victory Garden.” A sign at the entrances invites visitors to “come and sit.”

Over the years, Pastor Beatty has spent countless days beautifying the garden, often taking small houseplants that people had discarded and transplanting them to the beautiful area.

Major renovations took place at the church in 2003, including the restoration of the floors, pews, seats and doors. During the renovations, an electrical fire engulfed the Fellowship Hall. Many church records, books and photos were destroyed, as well as furniture and appliances. Due to the quick response of the Boca Grande Fire Department, the fire was contained and the newly renovated church was saved.

“The Episcopalians have been great neighbors – they helped us after the fire and gave us money to restore the inside,” Pastor Beatty said.

The new D.L. Moody Fellowship Hall would be rebuilt later that year.

An Indiana couple donated a beautiful bell carillon In 2004. Speakers were installed in the church steeple, and it plays songs for five minutes twice a day, at noon and 5 p.m. The pastor picks the songs via computer, and the music reflects the season.

In 2005 a new outdoor sign was built, matching the original building architecture. A couple from Ohio donated it.

In 2006 the Lindner Foundation of Cincinnati donated a beautiful water fountain depicting “Rebecca at the Well.”

In 2007 a couple from Georgia dedicated the life-size nativity scene that is put on display on the west side of the church each Christmas season.

Having only an eighth-grade education, at the time, Pastor Beatty said he received God’s grace in 1972, when he felt the call to mission. An opportunity arose for him to attend Midwestern Baptist College in Pontiac, Michigan. He went on to earn a doctorate of divinity degree from Heritage Baptist College in Indiana.

“God works in wondrous ways and leads us toward the right paths if we remain humble,” he said.

Established in 1909 on Gasparilla Island, the church is located at 421 Fourth Street in Boca Grande. The site was added to the United States Register of Historic Places on December 2, 2009. Pastor Beatty was instrumental in getting all of the paperwork submitted and processed to earn this historical designation.

The pastor has been married to his wife, Betty, for 54 years. Betty is the pianist/organist at the church. The sign in front of the church doors states that visitors are welcome. And Pastor Beatty stands by those words.

“It doesn’t matter what denomination you are or once were, everyone is welcome to come and celebrate Our Lord and Savior.”

The pastor said he hopes to finish his ministry in Boca Grande.

“My heart is here, and I’d like to spend the rest of my days with this community.”