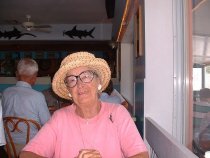 BY MARCY SHORTUSE- There are few woman in any first-world country who could sit at the finest table in the finest home, and casually discuss how she skinned a goat on board a cruise ship to the Galapagos Islands, or how she drank heated mare’s milk with urine to get her day started in middle Mongolia. Marguerite East was one of those select few who could … and those tales were just mild compared to some of her worldly exploits.

Marguerite passed away on April 27 at the age of 105, in Fort Myers, leading many who knew her to possibly conclude that travel keeps you young at heart … but it was more than likely a combination of many traits that kept her going into her triple-digit years. She was one of the kindest, most generous, and most driven people, and she was an institution on Gasparilla Island for many years.

Before delving directly into her life on the island, one very interesting fact about Marguerite was that she was the third of nine children born to an English mother and a father from Halifax. Though she was born in Nova Scotia she moved to England when she was 8, to live with her grandmother. Marguerite came back to North America when she was 11, and spent the remainder of her young years in Massachusetts. When she passed she was the only living sibling. Coincidentally, her mother died at the age of l05 as well.

Marguerite and her husband, Bill East, lived in Indonesia for several years during the 1960s, prior to calling Boca Grande home in 1967. Her husband, Bill, was sent there through his job with the state department, and Marguerite loved it there. She picked up the language, she loved the natural environment, and she loved the people. Unfortunately, political unrest was the reason the Easts had to move back to the States, and that is when they came to Boca Grande. One piece of her former life that she insisted come with her was a canopy bed made of rosewood that was centuries old, and one of the few pictures we have of her today is one where she is sitting on that bed.

Marguerite hit the ground running here on the island, by joining the Boca Grande Woman’s Club and volunteering in many capacities. There wasn’t a bike parade, spring fair or Halloween carnival she wasn’t a major part of, and she stood at the forefront of charitable and patriotic ventures such as petitioning for banks and public buildings to fly the MIA/POW flag, and gathering donations for victims of Hurricane Hugo in 1989.

She loved the island’s children, and in 1989 she could be found teaching Chinese to 3-and-4-year-olds in Anne Wingate’s daycare group at the Boca Grande Community Center. She never had grandchildren of her own, but as she aged she realized the importance of coaching the new generation to be kind, to be generous, and to always question “why.” She spent hours reading to them at the Community Center’s programs, and her elegant, patrician accent always held their attention.

Marguerite was also a great lover of history, and she co-wrote a book titled, “Island of the Mind: Gasparilla” that was illustrated by Patti Middleton. When people had a question about island history, Marguerite was one they would often turn to for guidance in finding the answer. Even though she wasn’t born and raised here, she had delved so deeply into our history and retained so much, there wasn’t much she didn’t know.

Marguerite always planned ahead when it came to bringing people joy. She loved to travel, and one of her favorite things to bring with her to landlocked places was seashells. In 1989 she took a trip to Russia, knowing that most of the people – particularly children – she would meet had never seen them before.

Her work with the Boca Grande Woman’s Club was legendary, and there wasn’t a bargain sale she couldn’t run like a champ. At the 10th annual Woman’s Club Rummage Sale she cleaned out two entire rooms of goods, and was well into working on the third room when the sale had to close. She later reported an income from that event of more than $1,900, an unprecedented amount for those days in the 1980s. For years she worked diligently to increase proceeds each year, and she succeeded. 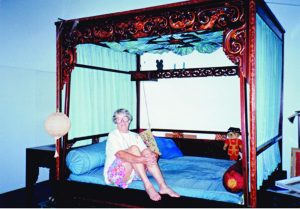 rriage, Marguerite was at a loss as to what to do next. She did the only thing that seemed right at the time – she put on her bathing suit, grabbed her bicycle and pedaled to the Gulf, where she swam for hours. While he wasn’t her first husband, he was the love of her life and she took care of him during a very long and debilitating illness. Prior to his passing, he told Marguerite he wanted his ashes to be scattered in the Gulf of Mexico or the Pacific Ocean, and she followed his wishes by having a Coast Guard ceremony at the south end of the island.

Marguerite moved off the island in the late 1990s, and her home that was located at 5th Street and Palm Avenue became the property of The Gasparilla Inn & Club. It was torn down, and a small park is there in its place. After she left it was strange for island residents not to see her riding her bike, or swimming in the Gulf, or just sitting downtown, admiring the view.

She always wore a straw hat, she always had a smile, and she never met a stranger.