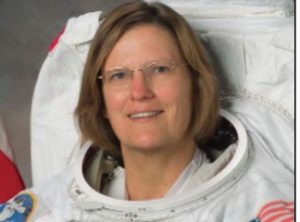 The Hubble Space Telescope has revolutionized our understanding of the universe, transformed our knowledge of celestial bodies orbiting stars, and measured precisely how fast the universe is expanding. One woman who helped to keep this dream alive was Dr. Kathryn D. Sullivan, a retired NASA astronaut, former Under Secretary of Commerce for Oceans and Atmosphere of the National Oceanic and Atmospheric Administration (NOAA), and an inductee into the Astronaut Hall of Fame. On Wednesday, Dec. 11 The Boca Grande Historical Society will host Dr. Sullivan at 4:30 p.m. in the Boca Grande Community Center auditorium, 131 1st St. W.

Dr. Sullivan was the first woman to walk in space and was part of the team of engineers, scientists and astronauts who launched, rescued, repaired and maintained the Hubble Space Telescope.

Her upcoming book, “Handprints on Hubble,” explains in vivid detail the work involved in inventing the tools and processes that made in-orbit maintenance possible. Without these inventions, repairs of the defects in the Hubble mirrors would not have been possible.

Dr. Sullivan will share her experiences working with NASA, her space walks, the Hubble Space Telescope and the early beginnings of her passion for outer space.

Along the way, Dr.Sullivan has chronicled her early life as a “Sputnik baby” and her path to NASA through the space program as one of “35 new guys.” She was one of the first six women to describe in vivid detail what liftoff feels like inside a spacecraft.

A reception for the general public will be held in the Woman’s Club Room of the Community Center following the presentation. There will also be a private reception for patron subscribers and Dr. Sullivan in the home of Whitty Ransome and Tom Wilcox. It will be sponsored by Roger and Joyce Howe. Copies of her book will be available for purchase.

Tickets can be purchased online at bocagrandehistoricalsociety.com, or by calling the Boca Grande History Center at 941-964-1600. You can also pick them up at the History Center, located at 170 Park Ave. in Boca Grande.