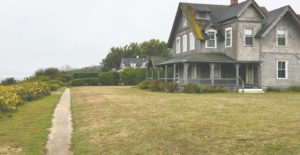 There are more than a few Boca Grande property owners and regular visitors who are very well acquainted with Nantucket, and many of those are familiar with the iconic ’Sconset Bluff Walk. It is a walkway approximately one mile long, and its width varies from location to location along the way. It is very much like our Promenade – the iconic walkway that runs along the top of the seawall from 1st Street to 4th Street – and many of the same problems that we have with our little footpath have plagued the ’Sconset Walk in the past.

The ’Sconset is actually named for a village called Siasconset, but over the years the name has been shortened to ’Sconset by people who use it frequently. The Bluff Walk was created by William Flagg, who bought property between ’Sconset and Sankaty Head, also known as Plainfield. The walk used to go all the way from ’Sconset village to the lighthouse at Sankaty, but erosion has taken part of the original walk out. Now there is a lead-in via a road that you can take to complete the original path.

In 1924 the town of Nantucket voted to attempt to secure ownership of the path through the state’s Land Court, leaving the Proprietors of the Common and Undivided Land, as they call it in Nantucket, as the trustee of the land, and the town appointed as trustee in their place. The Proprietors agreed to give Nantucket the deed not only to the path, but to all of the aforementioned cliff face and land at the bottom.

In 2011 the Roads and Right of Way Committee established legal access to the footpath from a public road that runs parallel. A “Public Way” marker was placed at the beginning of the path, in ’Sconset.

Susie Trexler is a historical preservation urban planner from Chicago who enjoys exploring historical areas of the United States. She blogged about the ’Sconset Bluff Walk and shared some of her amazing photos of the path with the Beacon.

In her blog she wrote, “If you head to Nantucket’s easternmost edge and the town of Siasconset (locally known as ‘Sconset) and navigate to Front Street, you will find the start of the ‘Sconset Bluff Walk. Front Street, itself, is a picturesque road made up of seashells and bordered with grass. A sharp turn onto the bluff walk and you are skirting the broad yards of large, shingled houses, heading north along the edge of the ocean. The houses are well aware of their location and seemingly face the ocean, their backs to the road behind.”

It sounds very familiar, if you’re familiar with the Promenade of Boca Grande.

Like Nantucket, in Boca Grande there are still people who live along the Promenade who aren’t happy at all about strangers being allowed in what they call “their backyards.” Some residents continue to try to block the path with plantings (some with thorns, which really makes a statement) and rocks, and signs that say “private.” The difference between Nantucket and Boca Grande is, of course, that Boca Grande residents have no recourse through municipal committees or board to contest these encroachments, other than (according to Lee County officials) through civil lawsuits.

While the county code enforcement and zoning departments did once enforce the Right to Promenade, they have apparently decided that will no longer happen.

When the county public information officer was asked to convey that message to code enforcement, they responded by saying, “While cases were opened and investigated, they were never brought to a hearing due to the fact that the County Attorney’s Office advised that the Promenade is a private deed restriction, which is outside the purview of a code enforcement action.”

Allen Reinhard is a diehard Nantucket history buff and has served on several municipal boards, including the Roads and Right of Ways Committee; there’s not much about Nantucket that he doesn’t know. When he described their walkway and the issues that have come along with it, he might as well have been describing Boca Grande’s Promenade.

“Unfortunately, even though there are regulations to not block the way, people put up obstructions to keep the ‘riff raff’ out. One of the things we’ve done here is that we have looked at a number of the old ways, the public ways, on maps. We went to check with the Registry of Deeds to verify they were public ways. After verification we went through the process of putting up 36 “public way” monuments around the island. That is helpful to the property owners (especially the new ones) who spend tons of money and expect to have their own private beach. But it seems to be an ongoing battle. We try to convince people to take a common- sense approach.”

Reinhard said some common ways that people along the ’Sconset Walk encroach public ways is to put rocks in front of the property on the roadway, as well as plants.

“We point out to them that there is an encroachment policy island-wide, which states you cannot do that. You cannot take by adverse possession any public property, and that includes placing rocks in the roadway,” he said.

Reinhard said they make it clear to property owners that if they are attempting to block a path or road by putting rocks or trees in the way, they are liable if someone is injured.

“If a deer runs out and they swerve and hit a rock, that is a liability to the property owner,” Reinhard said. The same holds true on a private way. Fortunately, we have a Select Board and a Department of Public Works that is responsible for enforcing this. That is the key.”

When we asked Lee County’s public information officer if property owners would be liable in the event someone fell off the seawall trying to walk the Promenade (considering in several spots the only place to get through is on the top of the wall, which is only a few inches across), the county attorney said, “Lee County does not offer legal advice on such matters. A discussion of tort liability would need to be directed to a private civil attorney.”

Reinhard explained that in Massachusetts, local municipalities have power of eminent domain. Even though it’s a power that is used sparingly, in this case the town used it when property owners started blocking accesses to the beach.

“We have been successful in getting the town to take these ways that had always been used as public ways, but had never been officially recorded as such,” he said. “Groups like the Roads and Right of Way Committee went in and actually did the taking of these ways. Granite markers were put in the ground. We made sure they were registered. In the future they shouldn’t have this problem again.

“You would think that people would recognize there needs to be some common sense here, as far as public access. If you want to control bad behavior, there are other ways to do that.”