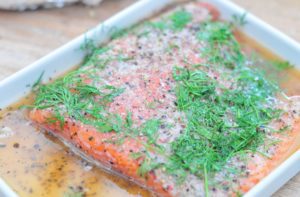 Braden Perkins was born in New Orleans and grew up in Boston. Braden worked for four years with celebrity chef Tom Douglas in Seattle.

In 2011 Braden and his partner, Laura Adrian, opened their first restaurant, Verjus, beside the Palais Royal in the center of Paris, France.

In 2015 the duo opened their second restaurant just down the street from the first. In 2020 they purchased a farm just outside Paris and will begin construction on a restaurant at the farm in the spring of 2021.

Braden has been featured on “The Barefoot Contessa” with Ina Garten, as well as in the “New York Times,” “The Wall Street Journal,” “Bon Appétit,” “Saveur,” “Food and Wine,” Travel and Leisure,” “Afar,” Goop,” “Milk Street” and other publications.

Laura Adrian is the daughter of islanders Jane and Joe Adrian. Braden and Laura are on the island for a time, and graciously are allowing us to publish some of their recipes.

BY BRADEN PERKINS – Our flight from Paris was scheduled to land in Stockholm at 2:45 p.m. From the air, the landing strip below looked like a black tie on a white dress shirt of a snow-covered airport and surrounding fields. By the time we landed and taxied to the terminal it was 3 in the afternoon. The sky was pitch black, the moon and stars glowed above.

We were in Stockholm as the lucky guests of Ture Tufvesson and his wife Donna, friends from NYC that own the restaurant Serafina in East Hampton. Every winter, Ture and Donna return to his native Sweden to host a Christmas buffet with fifty friends and family at the restaurant Ulla Winblath in the Djurgorden neighborhood of Stockholm. Laura and I were two out of the six American’s who had been invited that year.

For the uninitiated, like we were, Christmas buffet in Sweden is sort of the best of American Thanksgiving and Christmas feasts served at the same time. The buffet starts with several hours of a gregarious MC telling stories, playing music, and regaling the crowd in rounds of Swedish folk songs. After each story, musical interlude or folk song, you hold up a shot glass, shout “skoal”, and drink a shot of licorice flavored aquavit. The restaurant’s servers race around the room with aquavit bottles to quickly refill shot glasses before the next story or interlude ends.

Once your liver is adequately pickled with booze, the meal begins. The Swedish tradition of Christmas buffet, whose origins trace back to 1500, is to eat this epic feast over several hours, in five rounds. The first round is always herring and cheese, then cured salmon and trout, poached shrimps and crawfish as well as a variety of fish paté. The third round is charcuterie, hams and pickles, followed by a round of cooked meat and fish, vegetables and, of course, meatballs. The final round is a never-ending supply of cakes, fruits, jams and anise-flavored cookies.

Typically the cured salmon, or gravlax, that is served at a Christmas buffet is cured over several days. The resulting fish has had most of it’s moisture extracted and therefore can be preserved over longer periods than fresh salmon. My version is a quick-cure and allows the freshness of the salmon to still come through for warmer seasons. A quick-cure is also more versatile as you can slice and serve the fish semi-raw as you would for gravlax, or you could cook the fish whole in a pan with butter and serve with some roast potatoes, pickled vegetables or a mixed green salad.

This is a very basic quick-cure. You can alternate the herbs and seasonings in the cure with almost anything. Diced jalapeño, grated beet, lime zest, nasturtium leaves, grated horseradish, even grated Parmesan cheese all work well. We got our salmon from Boca Grande resident Pat Ryan who caught his in British Columbia. Very good salmon can also be found at the Island Seafood Market truck or Hudson’s grocery store.

1. Remove skin from salmon by running a knife along the skin side of the filet.

3. Pour 1/3 of the salt mixture onto a platter or small cookie sheet.

4. Place the salmon filet on the salt mixture.

5. Cover the salmon filet with the remaining 2/3 of salt mixture.

6. Cover the platter or cookie sheet with a piece of plastic wrap.

7. Place platter or cookie sheet in the fridge for 24 hours.

8. Rinse salt mixture from salmon filet and pat dry with a kitchen towel.

9. Slice as thick or thin as you like and serve.

Newer Post‘A Better Shot’ program at Lemon Bay Golf Course celebrates 25 years of giving to the community
Older PostLETTER TO THE EDITOR: Not everyone can ‘Ditch the Cart’