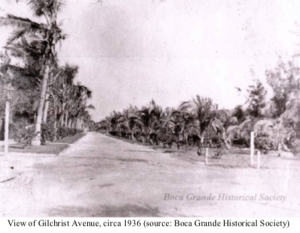 BY MARCY SHORTUSE- An otherwise sleepy September in Boca Grande has been stirred up with the news that segments of the residential downtown historic district have been nominated for placement on the National Historic Register, and that a presentation was to be made to the Lee County Historic Board on Thursday, Sept. 17 on the topic.

While Lee County Principal Planner Anthony Rodriguez made assurances that no action would be taken at the meeting, the fact that it was on the agenda for the meeting without any property owners in the district being notified made some people in the community take notice … and not in a positive way.

The documentation that was forwarded to the Boca Beacon this week showed the nomination was prepared by Mikki Hartig, owner of Historical & Architectural Research Services and Architecture out of Sarasota. She is a planning consultant who has worked on other island projects in the past, including the placement of The Gasparilla Inn & Club on the National Historic Registry, as well as the downtown business district.

Several people, attorneys included, found out about the Lee County Historic Board meeting in Fort Myers just the day before the meeting was scheduled to take place, and went to make sure that no action was taken. They also intended to have the board take note that this seemed to be an irregular way to proceed with such a nomination.

Paterson agreed, and said that property owners had been notified of the intent to nominate this area of the village for the National Registry, and a public review of this nomination had already taken place, but she could not recollect when it occurred as it was years ago.

When asked why no notification or press release had been sent out regarding the nomination proceedings, Hartig said, “We held off, because we didn’t want to alarm anyone. We didn’t want anyone to make assumption they had to run plans through Tallahassee.”

Hartig said that any permitting processes that would have to take place for a renovation or remodeling of properties within a location placed on the National Historic Registry would still run through local government entities, and that no one from the Department of Interior in Tallahassee would review the permit application.

However, questions have arisen as to what might happen to beach access streets, the Gilchrist median, and any roadway in general within the newly-registered property. Could this placement on the registry take the management or ability for Lee County to handle the property as they see fit out of their hands, and put it on the state level? Would this placement mean certain areas within the district would have to go back to original historic intent?

These are valid questions that need to be answered before property owners can make an informed decision as to whether or not they want to be placed on the National Historic Registry.

An inquiry to Ryan Ash, Deputy Director of External Affairs for the Florida Department of State regarding these questions was made, but no answers were given as of press time.

Lynne Seibert, a long-time resident who has extensive knowledge of island history, and who has served as the chairman of the Boca Grande Community Planning Panel in years past, said that she was aware Hartig was going to work on completing the nomination for the residential portion of the historic district. She said when the matter had come up before, the county did not have the budget to complete the project at the time.

Seibert said she had suggested that a press release should be prepared after the Lee County Historic Preservation Board approved the submission so people would understand the advantages.

“It is my understanding that each homeowner will be sent a letter at some point,” she said. “The listing has nothing at all to do with parking, beach access parking, weight restrictions, etc. It is only counting the number of contributing historic houses if there are enough of them in a certain area a district can be recognized. There are really no disadvantages to a National Register Listing. If anything it is a great marketing advantage and will help attract the heritage traveler. Boca Grande is such a unique place in Florida because it has maintained its historic scale, village charm and natural beauty. It is wonderful to be recognized.”

An informational public meeting has tentatively been scheduled for October 14.

NOTE: Just before press time we received a phone from Hartig, who told us she had asked the Lee County Historic Board to table the discussion until after it was presented to the BGHPB. Keep reading the Boca Beacon for more on this story.

Newer PostA message from the Clinic: What if you’ve been exposed to COVID-19?
Older PostA word from The Island School about COVID-19, students and families