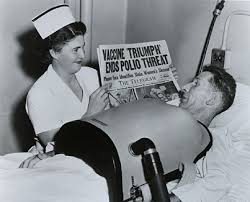 BY DALY WALKER, MD – I would like to commend those of you who have been practicing social distancing. The results of your sacrifice are not readily apparent, but I can assure you that by helping to suppress the spread of the  coronavirus, you are preventing yourself and others from getting sick and in doing so, saving lives. I urge you to continue what you are doing, even intensify it. The most critical days in the battle lie ahead.

My attitude and opinions about the pandemic we are in the midst of is shaped by my experience during the polio epidemic of 1949. An eight-year -old boy then, I was infected with the polio virus and spent the summer of that year with a paralyzed throat in a hospital in Muncie, Indiana. As I look back at that time, one thing stands out, and that is how the entire nation came together to battle the disease they called “Infantile Paralysis,” and how the citizens of the small town where I lived sacrificed to keep its residents as safe as possible. They closed their businesses, movie theaters and swimming pools and stayed at home. They dropped their dimes in iron lung canisters to fund research for a polio vaccine and to assist victims on the long path through physical rehabilitation,.

I contrast that now with the political rancor and posturing that surrounds public health policies and the reluctance of some citizens to comply with the social distancing guidelines that our scientists and physicians assure us will save lives.

Why is this so? Perhaps it is because in 1949 the United States was still under the influence of President Roosevelt, who himself had been paralyzed from polio and who had a passion for those who were suffering. He had a deep desire to prevent others from experiencing what he had.

As he said, “Much of the future of America depends on our success in combating this disease.”

I believe history is repeating itself and what he said about polio is true today about  COVID-19.  What we need to bring us together in the fight against coronavirus is a March of Dollars or at least the mentality behind it.

Chairman the Boca Grande Health Clinic Board of Directors